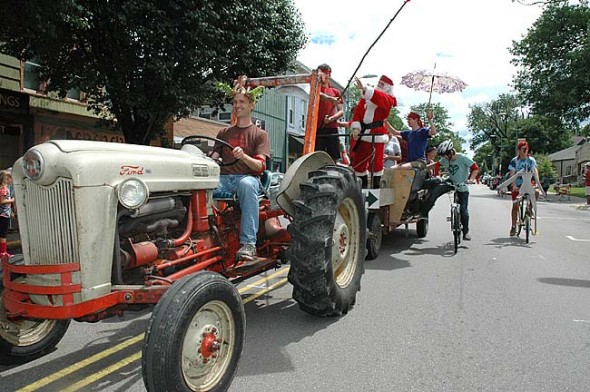 A smaller than usual but still enthusiastic crowd greeted Saturday’s rescheduled 4th of July parade last weekend. Rains on the 4th forced the parade’s cancellation on Thursday, when it was rescheduled for Saturday. But the parade remained an iffy prospect up to the last minute on Saturday, when the stormy weather cleared, the sun came out and villagers marched proudly through town. Above, Yellow Springs High School teacher John Day drove a tractor pulling student supporters of the School Forest, including Santa Claus.

The brave souls at this year’s Village Fam Summer Jam — both audience, performers and merchants — held fast against the storm and proceeded with their programs on the Fourth of July. the two photos below were submitted and taken by Kiel Feeser.