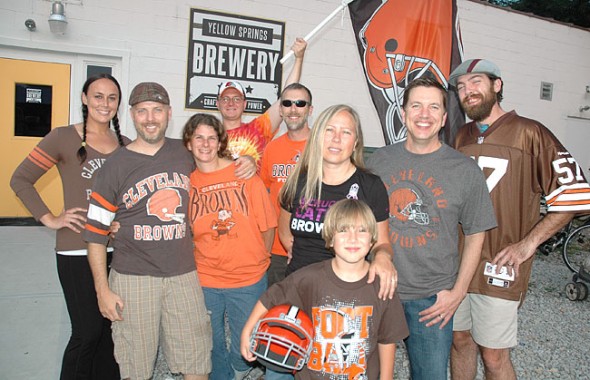 The Yellow Springs Browns Backers are gearing up for the new season with a barbecue potluck meet and greet party on Sunday, Aug. 18, 4–6 p.m. at 693 Omar Circle.

“We hope to gather all YS Browns fans together to provide an opportunity to meet, generate excitement about the upcoming season, and to share some good food and beverages together,” according to organizer Jason McClean in a press release.

The event is BYOB and will include a giant bouncy house for kids. A Browns fan photo shoot will follow the potluck at the “Springs” sign at Bill Duncan Park, the corner of Dayton and W. Limestone Street. Attendees are encouraged to wear their Browns gear.

Membership to the Browns Backers costs $25 per individual, or $40 per family. Those interested in joining can register at: http://fans.clevelandbrowns.com/fans/backers/application_ind.php

The club will meet for games at the McClean home at 693 Omar Circle one half hour before kickoff. The club will also travel to Cleveland Browns Stadium to see the Browns take on the Detroit Lions on Sunday, Oct. 13.

In addition, the club will organize another fundraiser this year to benefit a local organization.  Last spring, the Browns Backers sponsored and coordinated the first ever YS Adult Prom which raised $2,400.00 for the YS Kids Playhouse.