Girls tee off for the first time

In what Coach Mike Reichert believes may be the first ever girls golf match in Yellow Springs High School history, the four-strong Lady Bulldog golf team competed this week at a match at Locust Hills Golf Course in Springfield.

Returning district qualifier Rachele Orme finished with a nine-hole score of 35 and a medal as she led her team to a second-place showing out of three teams competing.Teammate and returning golfer Taylor Beck had a 57. Newcomers Camara Cross and Molly Brown turned in scores of 65 and 70, respectively. The final team score was Madison Plains, 170, YSHS, 227, and Fairbanks, 240. 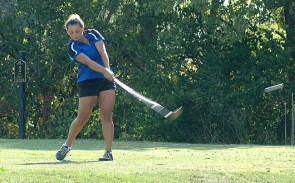 At the Metro Buckeye Conference match on Aug. 12 at Moss Creek, the Bulldogs finished six out of seven teams. Leading the team was Theron Orme with a low score of 105 for 18 holes. Morgan Beard had a 107, Danny Grote shot a 117, Aaron Harshaw turned in a 119 and Zeke Reichert finished with a 128.