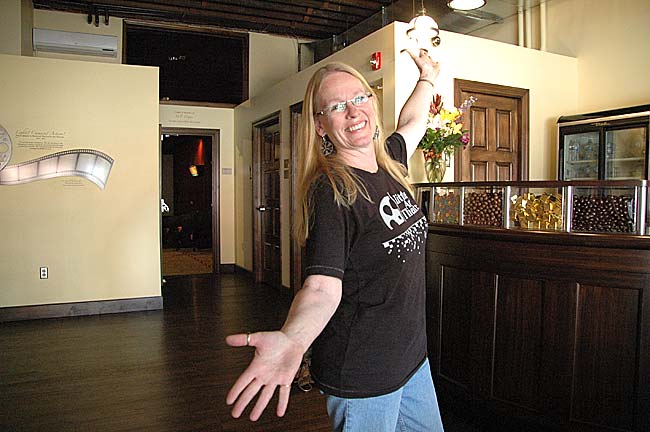 Little Art Theatre Executive Director Jenny Cowperthwaite welcomes theatergoers into the new lobby of the renovated theater, which will be open to the community during an open house from 3 to 9 p.m. on Saturday, Sept. 28. After the open house, the theater begins a 12-day “Back to the Movies” film festival. Regular programming resumes on Friday, Oct. 11. (Photo by Megan Bachman)

Over the last five months, a half-million dollar renovation has transformed the 84-year-old Little Art Theatre from a relic of the 35-millimeter film era to a state-of-the-art, fully-digital and accessible movie house ready for the 21st century.

With $475,000 in local donations, the theater was upgraded with a digital projector and surround-sound system, new cushioned seats with cupholders, handicapped-accessible bathrooms and a spacious lobby, among other changes.

To showcase the makeover, the Little Art will hold an open house and grand reopening from 3 to 9 p.m. Saturday, Sept. 28, with free films, live music, free popcorn, face painting, concessions with wine and beer for sale, limited edition T-shirts commemorating the renovation and more. Short Street will be closed for food trucks and dancing in the street, with movie-themed music provided by DJ Juju from 5 to 9 p.m. Attendees are encouraged to dress as a favorite movie character. At 7 p.m. the theater will screen the world premiere of Steve Bognar and Julia Reichert’s animated welcome movie custom made for the Little Art.

Then on Sunday, Sept. 29, a 12-day film festival begins with the screening of a fresh digital print of the 1923 comic silent film Safety Last! starring Harold Lloyd, one of Cowperthwaite’s favorite films. The “Back to the Movies Festival” continues with a parade of fan favorites and new movies from over the summer, including the 1965 musical The Sound of Music (one of Little Art patrons’ favorite films according to a recent survey), Before Midnight (2013), The Kings of Summer (2013), Renoir (2012), Mud (2012), Much Ado About Nothing (2012), the documentary 20 Feet from Stardom (2013), the Japanese animated film From Up on Poppy Hill (2011) and The Way, Way Back (2013).