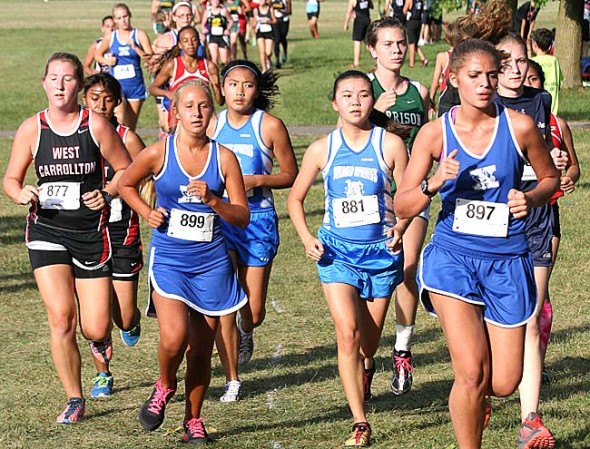 The YSHS boys golf team competed at the Christoff Classic at Reid Park Golf Course last Saturday. Liam Weigand scored a 97 over 18 holes after an impressive 46 on the back nine. Kyle McAnerney finished with a 111, Jonathan Clark posted 113, Aaron Harshaw scored 129 and Danny Grote came in with a 133.

Earlier in the week, Weigand once again led his team, posting a 50 over nine-holes at Locust Hills against Madison Plains. Other Bulldog golfers competing in the 189–211 loss were Theron Orme (53), McAnerney (54), Harshaw (54), Morgan Beard (55) and Zeke Reichert (55).

After starting the season with a two-game loss, YSHS came to the court ready to face Dayton Christian on Sept. 5 at home. The Lady Bulldogs defeated the visitors in three games, 25¬–18, 25–17, 25–17. According to Coach Lindsay Kerns, it was a big win for the Lady Bulldogs with a starting senior setter out with an injury and a freshman filling in that spot.

Harshaw led with five kills and 10 digs, while Camara Cross contributed five aces and five digs and Kasey Linkhart and Meredith Rowe each had six assists.

Following that game was a home match against Xenia High School on Sept. 7. Again, it went to four competitive, tight games resulting in Xenia taking home the victory, 27–25, 25–23, 25–22, 25–16. Harshaw had an impressive 17 kills and four blocks. Brown had 10 assists and Elizabeth Smith had five aces.

The team record is 1–3 overall and 1–1 in the Metro Buckeye Conference.

For the last two years, the incoming freshman volleyball players dominated at the middle school level, grabbing two conference titles and posting a 21–2 record. Now they’re continuing their success at the YSHS junior varsity level. So far the team is undefeated with a record of 4–0 and is 2–0 in the MBC.

At a home match against Xenia on Saturday, the JV team put on a display of teamwork, talent and toughness. The first game was neck-and-neck before the Lady Bulldogs pulled away to take a 21–15 lead. But the visitors went on a 9–3 run to tie up the game at 24–24 before Yellow Springs earned its two points with confident strikes. They ended up winning the match, 25–24, 25–18. Elizabeth Smith scored 11 points, while Danielle Worsham had six points.

Against Dayton Christian the Lady Bulldogs played very well together despite playing without one of their regular starters, according to Coach Chris Linkhart. They beat Dayton Christian 25–20, 14–25, 25–20. Worsham led with 10 points, Gracie Wilke scored nine and Smith had eight points.

The YSHS Lady Bulldogs opened the season with two away games before facing Tri-County North at Home on Aug. 31. So far this season sophomore Alice Miller, junior Kara Edwards and sophomore Ayeshia Allison have connected for many opportunities at goal and tested the goalkeepers for Mechanicsburg, Stivers and Tri-County North.

The Bulldogs kicked off conference play against a tough Dayton Christian team on Sept. 5. Senior Brianna Ayers, Edwards and Allison created opportunities but the Lady Bulldogs were unable to find the net.

The defense led by sophomore Ashley Longshaw in goal and sophomore Ursula Kremer at sweeper has frustrated opposition players since game one. Longshaw already has an amazing 40 plus saves to her credit.

Throughout the first part of the season the team has worked hard but some speedy opposition forwards have found the net to leave the Lady Bulldogs with an 0–4 record.

The YSHS boys cross-country team finished up the third week of the 2013 campaign by earning a combined total of 26 wins at the Fairborn and Brookville Invitationals. They accomplished this with a ninth-place finish out of 26 squads at the mostly Division I meet at Fairborn’s Community Park course last week. The team then added a seventh-place finish out of 20 schools at the mostly small school Brookville Invitational.

Conner Gravley-Novello, a junior, led the team to the finish line in Fairborn as he nearly broke the 19-minute barrier with a final time of 19:03 for the 3.1-mile course. The team’s captain was rapidly followed across the finish line by a pair of freshmen in Hayden Orme, 19:08, and Cameron Haught, 19:22. The young trio finished 24th, 26th and 30th overall out of 174 runners.

Carter Collier, the team’s lone senior, is running his first year of cross country. Last Wednesday night he finished 70th in 20:42. Levi Brown, the third freshman on the varsity squad, completed the scoring by placing 82nd with a time of 21:16. Oluka Okia, a sophomore, was right with Brown during most of the race and ran a season-best 22:56, finishing 122nd.

Junior Emma Romohr was fast, furious and dangerous at Brookville on Saturday. With new shoes Romohr dropped her lifetime best from the 34:03 she ran in Hillsboro just a week earlier to a new personal record of 30:08. She placed 84th out of the 106 runners in the race.

Teaming with Romohr at the Brookville Invitational were Charlotte Walkey, Christina Brewer, Olivia Brintlinger-Conn and Maya Creighton. Creighton and Brintlinger-Conn earned new lifetime bests as the duo posted times of 29:53 and 24:59. Creighton’s time was good for 79th while Brintlinger-Conn took 39th. Brewer, a bit under the weather, was 43rd in 25:07. Walkey, a sophomore, was the leader across the finish line for the Lady Bulldogs. She was 14th in 22:23.

Walkey had her best time of the year to date with an 11th place finish in 22:10 at the Fairborn Invitational earlier in the week. This led the Bulldogs to 12th place out of the 16 schools that scored at the meet. The duo of Brintlinger-Conn and Brewer also posted solid times, finishing 43rd and 44th overall out of the 122 girls in the varsity race. Their times were 25:35 and 25:44, respectively. Creighton was 84th overall in 29:56 while Romohr was 104th in 32:53 to complete the squad’s scoring.

Last week the team came close to beating the more experienced Dayton Christian combined seventh- and eighth-grade squad. The Lady Bulldogs we were tied at 24 in the second game but then lost by two points.

Jude Meekin had two solid races last week for the McKinney School cross-country team. At a Wednesday evening meet in Fairborn the seventh grader placed 12 out of the 111 girls in the race. Her time was 14:11. Alejandra Erazo was 64th in a season-best time of 17:46.

At Saturday’s meet in Brookville the duo improved. Meekin lowered her season best to 14:09 with an 18th place finish overall out of 157 middle school girls. Erazo earned a new lifetime best with a 17:29 clocking which was good for 103rd place.

The boys team will have a full squad later in the year as the team has doubled in size over the past week. Kaden Boutis, the squad’s lone eighth grader, set the pace at both meets this week. At Fairborn he placed 35th overall in 14:14 for the two-mile course. Alex Rogers was right behind in 36th with a time of 14:10. Jesse Linkhart completed his first ever cross-country meet by taking 46th overall in 14:35. Zach Lugo dropped his lifetime best down to 15:31 and placed 67th. Some 121 runners completed the junior high course.