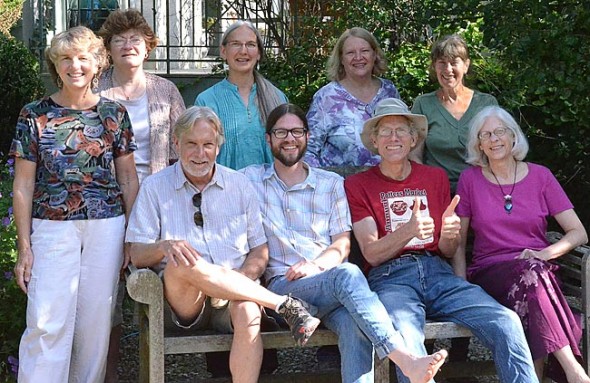 In February, Yellow Springs Pottery, a local artists’ cooperative, achieved a milestone of 40 years in business. A celebration party for its 10 members and their spouses was held at the Glen House Inn, featuring an afternoon swim, sushi by the pool, a tour of Glenn Owen’s art studio and a catered dinner, followed by a trivia contest. Yellow Springs Pottery members are, from back left, Evelyn LaMers, Kim Kramer, Jane Hockensmith-Reich, Eliza Bush, Janet Murie; front row, Jerry Davis, Justin Teilhet, David Hergesheimer and Marcia Cochran. Not pictured is Michele Dutcher. A pottery-making demonstration on Sunday, Sept. 22, and sale will conclude the anniversary celebration. (Submitted Photo)

While it’s true that when it opened in 1973, Yellow Springs Pottery, then known as the Pottery Cupboard, may have sold a few more fad items like hanging flower baskets, honey pots and chip ’n’ dip trays, the overall popularity of the co-op’s handcrafted ceramic tableware has endured, keeping its rotating group of member potters busy throwing, sculpting and firing original pieces for 40 years.

The artist co-op store celebrates its 40th anniversary from 12 to 5 p.m. on Sunday, Sept. 22, with a pottery sale, refreshments and all-day wheel throwing and hand building demonstrations in front of the shop in Kings Yard. The store is also selling commemorative anniversary mugs all year long.

Evelyn LaMers, who joined the co-op six months after it opened and is now its longest active member, is surprised that the demand for handmade functional pottery is still strong 40 years on. The shop’s product line — consisting largely of mugs, bowls and platters — hasn’t changed all that much, while the arts and crafts revival of the 1970s, a reaction against the proliferation of Formica countertops and plastic tableware of earlier decades, remains a popular decorating style, she said.

“I thought it was a fad and it would pass, but people still want nice handmade bowls and a vase to put flowers in,” LaMers said.

A few things have changed since three Bryan Community Center pottery teachers and another local potter started Yellow Springs Pottery as an outlet to sell their handmade items. From the original four potters who took turns staffing the store for four afternoons each week, the co-op has grown to 10 members (a number that has fluctuated over the years) and is now open seven days per week.

And the store has long since outgrown its original six-by-20-foot storefront in the space now occupied by a section of Jennifer’s Touch, which it rented at the time for $20 per month, according to a News article. Yellow Springs Pottery moved to its present location in 1975 and doubled its space a few years later.

As a cooperative, Yellow Springs Pottery members share expenses and take turns staffing the store, and they rotate other duties like bookkeeping, cleaning and advertising. While they work together to run the store, all members have their own pottery studios and their own gas-fired or electric kilns.

Over the years the cooperative has evolved to function more efficiently, requiring only one business meeting per year rather than once per month, and also more equitably, according to Janet Murie, a member of 31 years. A major change in how the cooperative worked came about when expenses and “store sitting” started to be divided proportional to sales, she said. After a flat membership fee and minimum time commitment to staffing the store, higher sellers are expected to pay more for expenses and also work more, a change which helped keep as members those with fewer sales and busier lives, Murie said.

According to its member potters, Yellow Springs Pottery has been a consistent outlet for their work that has helped them make a living from their craft. The potters also point out that the store’s success is owed to its variety of high-quality and affordably-priced pieces as well as the loyal support of locals and the steady flow of tourists in Yellow Springs. In fact, members are so pleased with high sales that no one wants to leave. The current lineup of 10 potters hasn’t changed in 13 years.

LaMers, who has been a full-time potter since graduating from Antioch College in 1969, started out by selling her work at art fairs and wholesaling, which yielded minimal profit compared to retail sales. The store has been a great way to sell her crafts to average people who want handmade items for everyday use at a price more appropriate for the area, since “this is not New York,” she said.

“I like selling to people who are middle-class, everyday people — people like me — in a medium price range, and that is the strength of the store,” LaMers said. LaMers uses architectural shapes in her pottery and is influenced by Bauhaus and Scandinavian design, she said.

Murie, who was 25 when she joined the co-op, has also made her living from Yellow Springs Pottery. A Yellow Springs native, Murie has enjoyed her life as a self-employed craftsperson. Compared to art fairs, a storefront has many advantages.

“The benefit [of the store] is having your work visible and for sale seven days a week,” Murie said. “Even though there’s a time commitment to the store, it’s still easier energy-wise than setting up at an art fair.”

Jane Hockensmith-Reich, a member of 24 years, moved to Yellow Springs from Indiana after she was invited to apply, and was accepted, to Yellow Springs Pottery. A former basket weaver, she moved into ceramics because it was easier to make a living in, she said. Today, she sells teapots and other items that combine clay with woven elements, as well as pieces that contrast the unglazed clay body with glazes.

“It’s an incredible store, it’s a great group of people and it was a great opportunity for me,” said Hockensmith-Reich, who views her work as “bringing beauty to people’s lives.”

Justin Teilhet, the newest addition, was accepted 13 years ago after waiting for five years for an opening. To join the co-op, a majority of current members must approve a candidate, and because membership is now capped at 10, it has been competitive. Since he joined, Teilhet has gone from creating ash-glazed stoneware to high-fired porcelain with traditional copper red celadon and metallic glazes. The vessels he currently makes are minimalist and midcentury modern, he said.

According to Teilhet, while there are many galleries in this part of the country, co-ops like Yellow Springs Pottery are rare, and special. A reason for its success is that instead of fixating on the details of running a business, its potters dedicate themselves to producing good work in large quantities — members literally buy their clay by the ton.

“Everyone there is so much more focused on the making and that’s why it works,” Teilhet said. “It’s about the clay pieces themselves first and foremost.”

At the time of its founding, the four original members of Yellow Springs Pottery — Pat Kontonickas, Paula Golden, Lynn Eder and Joan Page — viewed the shop as an experiment that might eventually lead to a complete arts and crafts cooperative at the Bryan Community Center to support Arts Council programs, according to a 1973 News article. While their goal was never achieved (though in 1983 a second artist co-op opened in town, Village Artisans Gallery), 40 years later the experiment seems to have proven successful. To Teilhet, the proof is in the pottery.

“It’s [successful] because of the good work,” Teilhet said. “The talent in that place is unbelievable and not as recognized as I believe it should be.”