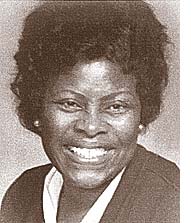 Alice Walker Wilds, surrounded by friends and family, peacefully passed away at the Maria-Joseph Care Center on Sept. 26 at the age of 89.

She was born Jan. 27, 1924 in Gaston, Ala. to Clarence and Zeola Mitchell Berry. She left Alabama in 1942 to attend Bernice’s School of Cosmetology in Dayton, where she graduated with honors in 1945.

She worked for years as a cosmetologist until harsh chemicals became too much for her skin. She worked as a housekeeper; she also became a teacher/counselor for the homeless in a special program called The Other Place. Following that, she worked as a technical aide in the United Cerebral Palsy program at Dayton Children’s Hospital and then she worked as a teacher in the “foster grandparent” program for years, helping children with their homework after school. She loved spending time with friends and family; she loved animals, especially dogs. She was a devoted Christian and a longtime member of Corinthian Baptist Church,

“Miss Alice,” as she was so affectionately called, was a sweet, loving, caring person who never met a stranger or a person she wouldn’t help. Words cannot express how much she will be missed, or how many people’s lives she touched. Miss Alice, or “Mother Dear,” was preceded in death by her first husband, John Walker, and her second husband, Jacob Wilds, and was a devoted wife to both. She was also preceded in death by two brothers, Walter Orr and Paul Berry of New York. She is survived by her son, Bob (Sherry) Walker and grandchildren Issa and Aiysha Walker, all of Yellow Springs. Services for her were held at Corinthian Baptist Church on Thursday, Oct. 3. Interment was at Dayton National Cemetery.