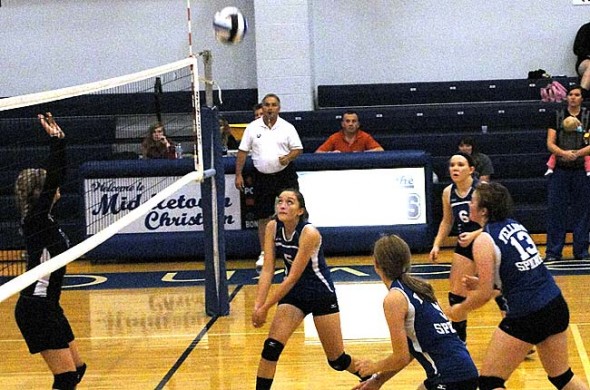 At the 2013 Metro Buckeye Conference Championships on Saturday, October 12, at John Bryan State Park, the Yellow Springs High School girls cross-country team led by sophomore Charlotte Walkey, came in second place. Walkey, who was eighth as a freshman, improved to fifth as a sophomore with a lifetime-best time of 21:12. That effort placed Walkey on the All Conference first team. Earning second-team All Conference was freshman Olivia Brintlinger-Conn. Brintlinger-Conn was 13th overall in 23:56. Also essential to the second-place finish overall for the women were the outstanding efforts of Christina Brewer, 17th, Maya Creighton 25th, Tabea Wegers 26th and Emma Romohr 27th.

At the MBC Championships on Saturday, the YSHS boys cross-country team improved to finish fourth after placing sixth in 2012. The team was led by the freshmen duo of Levi Brown and Cameron Haught. Both achieved lifetime-best times for a 5-kilometer cross-country race as they earned second-team All Conference recognition by placing ninth and 10th overall. Brown’s time was 18:31 with Haught just behind in 18:37.

Other scoring Bulldogs were Connor Gravley-Novello in 15th, Carter Collins 18th and Josh Seitz 29th. Collins time of 19:27 was a new lifetime best. Running well but not scoring were Sam Crawford, 42nd, and Oluka Okia, 45th.

After a win and a tie this week, the YSHS boys soccer team ended its regular season with a record of 13–1–2.

At last Thursday’s homecoming game, YSHS crushed Fairborn by a score of 6–0, with Hafiz Mensah finding the goal four times. Fairborn, the No. 9 ranked Division I team in the Dayton area, only got four shots off to the Bulldogs’ 20. Also scoring for the Bulldogs were Joe Plumer and Jared Scarfpin. Assists came from Scarfpin (2), Ian Chick (2) and Nathan Miller.

“It was a great homecoming with our biggest crowd all season and a great win,” Coach Ben Van Ausdal said. “Everything was connecting. We passed really well, possessed really well and the defense kept its composure.”

On Saturday, YSHS traveled to Kenton Ridge and left with a 1–1 tie. Several missed opportunities and a botched offsides call kept the Bulldogs from scoring the winning goal. Mensah scored the team’s only goal, and nearly gave his team the victory when a 16-yard shot careened off the post with three seconds left. Plumer had the assist.

See a photo of the YSHS homecoming court on page 11.

The rapidly improving Lady Bulldogs took the field with purpose against Miami Valley School on senior night on Oct. 3. The Rams got a quick goal but the Lady Bulldogs, undiscouraged, kept moving the ball up the field. Lady Bulldog midfielders Sierra Lawrence and Kara Edwards worked the ball through the middle while defender Brianna Ayers delivered dangerous crosses, but they could not find the back of the net and the score remained 1–0 at halftime. In the second stopper Kaila Russell and midfielder Sharde Scott shut down the middle third of the field, allowing the YSHS to push forward and keep pressure on the goal, but the Rams won 3–0.

On Oct. 5 the Lady Bulldogs faced unknown opponent Madison Plains and were up for the game. The teams were evenly matched but Madison Plains put in the first goal. YSHS picked up the pressure and after some back and forth play Ayers put one in the back of the net with 11 minutes left in the first half. The score was tied at halftime. Forward Ayeshia Allison with midfield support from Edwards and Lawrence came out strong from the start of the second half to create scoring opportunities. The Lady Bulldog defense with Sarah Jako, Alice Miller, and Dani Worsham held the Madison Plains offense to the outside of the field and goalie Ashley Longshaw saved a late second-half penalty kick. The score remained 1–1 until Madison Plains slipped a goal in off of a dangerous free kick awarded just outside the penalty area.

On Tuesday, Oct. 8, the YSHS junior varsity volleyball squad hosted Emmanuel Christian for their final game of the season. The Lady Bulldogs controlled the first game keeping the lead the entire game. In the second game EC battled back to take the game from the Lady Bulldogs despite Julie Roberts six serving points. In the third game of the match YS fell behind 13–7 when Gracie Wilke served up nine unanswered points followed by Julie Roberts serving another eight unanswered points to win the game. The Lady Bulldogs hung on for the win 25–20, 24–26, 25–13 finishing their season with a 13–1 record.

The McKinney 8th graders advanced to the semifinals of the MBC volleyball tournament on Saturday before falling to Emmanuel Christian. They advanced by winning a strong, gutsy match against a scrappy Xenia Christian squad in two sets: 26–24, 25–20.

Once again Evalynn Orme led all scoring with 10 points and four aces, while Kallyn Buckenmeyer and Payden Kegley also had strong outings with six points each. Setter and offensive play-caller Skyler Miller, fed all season by great passes from Raven James and Ellyson Kumbusky, kept Xenia Christian’s defense guessing by mixing things up. Favorite targets Elle Peifer and DeAunna Cheatom once again dominated the middle of the net, while Amani Wagner and Jasmine Davidson stepped up the pace on the outside as Miller found their kill shot sweet spot.

Against Emmanuel Christian, the Bulldogs put forth their most valiant effort of the season, scoring double their usual points against a very strong team, according to Coach Bubba Worsham.