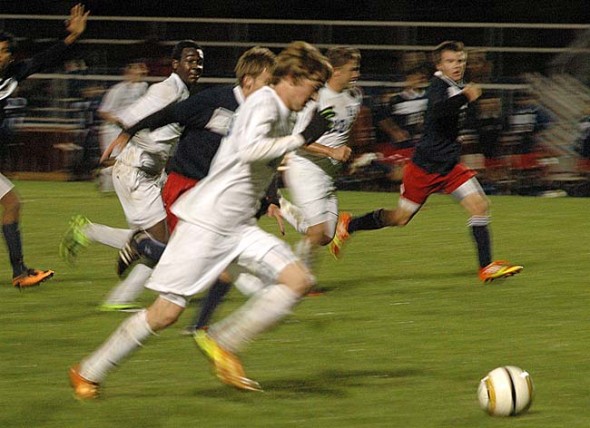 Hayden Orme takes the ball down the field at the Yellow Springs High School boys soccer game on Saturday. YSHS defeated Miami Valley 6–2 in the second round of the district tournament. The Bulldogs continue tournament play this week. (Photo by Lauren Heaton)

Walkey qualifies for regionals
Yellow Springs High School sophomore Charlotte Walkey aimed to finish in the top 16 at Saturday’s Dayton District Cross-Country Championships. Walkey, who narrowly missed a spot at the regional championship last year as a freshman when she grabbed 17th place, was up against the area’s best and ready for the challenge, according to Coach Vince Peters.

“It did not matter that it wasn’t her fastest first mile, today was all about place,” Peters said.

Walkey held on to finish 11th overall in 21:33 to lead the Lady Bulldogs to a fifth-place finish in the team standings. She will run at regionals next weekend at Troy High School.
“I am happy about qualifying.” Walkey said, according to Peters. “It’s never automatic.”

Olivia Brintlinger-Conn saved her best race of the season for districts. Brintlinger-Conn ran her lifetime best in spite of the sloppy course conditions to finish 26th in 23:34. Christina Brewer closed out her high school career by finishing 30th in 24:20. Maya Creighton came in 42nd in 27:52. Emma Romohr kept her string of sub-30 finishes intact by beating the clock by 31 seconds with a 29:29. That was good for 46th place. Walkey was the only YSHS runner to qualify for regionals.

Last Tuesday the Bulldogs clobbered Southeastern 12–0 after scoring two goals within the first minute of the game.

On Saturday against conference rival Miami Valley, the Bulldogs dominated in the midfield, winning the ball 95 percent of the time in the air. Though Miami Valley chose to face the Bulldogs after narrowly losing to them in the regular season, YSHS took control of the game from the first whistle and won 6–2.

The No. 4 ranked Bulldogs face No. 12 Botkins in the sectional final on Oct. 22. If they win, they advance to the district final against a Cincinnati-area team on Saturday, Oct. 26. Coach Ben Van Ausdal said the team is ready for the upcoming tournament games.

“My boys are really ready and are looking forward to the challenge,” Van Ausdal said. “Most important they’re really having fun right now. But it’s going to get tough.“

Boys run tough at districts
The YSHS boys cross-country team appeared to be pulling off a major upset during the first two miles of Saturday’s race at the Dayton District Championships. The trio of Connor Gravley-Novello, Cameron Haught and Levi Brown were steadily moving up through the tightly-packed field through the first couple miles of the 5K race. However the young Bulldogs couldn’t maintain that pace on difficult course conditions. Gravley-Novello and Haught passed Brown, and placed 27th and 28th overall. Brown finished 32nd and Carter Collins 35th. Gravley-Novello finished in 19:29 with Haught a half step behind in 19:30. Brown and Collins also stayed under 20 minutes at 19:47 and 19:57, respectively. However, both times were their second-fastest this year.

Josh Seitz, however, worked magic with the mud. He plowed his way to a new lifetime best in his final race of the 2013 season. His 20:46 was a personal record by 15 seconds and good for 45th place overall. Seitz completed team scoring with the Bulldogs finishing in seventh place.
Sam Crawford and Oluka Okia completed the varsity’s effort on this day, placing 55th and 62nd, respectively, with clockings of 22:26 and 23:34.

“Everyone ran incredibly tough,” according to Peters. “It was one of the most awesome efforts I’ve seen in my 31 years of coaching here at Yellow Springs.”

Locals shine at YS Invitational
This year’s invitational at Youngs’ Jersey Dairy was the biggest on record as a total of 939 runners finished the five races. The YSHS boys cross-county team had their best team finish of the year earning a well-deserved fourth out of the 27 scoring teams.

Leading the Bulldogs to that fourth-place finish were Gravley-Novello in 19th and Haught in 21st. Gravley-Novello ran a lifetime best 18:52. Haught was two steps behind in the sprint race to the finish in 18:55. Finishing third for the Bulldogs was Collins in 45th with a 19:50. Brown added 4th place points by placing 61st in 20:23. Seitz nearly broke the 21-minute barrier, placing 77th in 21:03. Crawford ran his best time ever at 5K. He finished 101st in 22:00.

In the girls race, YSHS’s Brintlinger-Conn was the top finisher. She finished just outside the awards and her personal record despite a huge kick. She was 33rd in 23:39. Brewer was 39th in 24:03. Creighton didn’t just want to come close to her personal record. She obliterated that old record by nearly a minute in 26:46. And with that split she gained a well-earned 82nd place finish. Romohr was just seconds off of her lifetime best while placing 123rd in 29:35. 160 runners finished.

Boutis finished an outstanding 37th overall out of 261 runners representing some 40 different junior high squads. His time was a new personal record of 12:48, five seconds faster than his time at conference championships. In 2012 Boutis was 84th in 13:48.

Matching Boutis in the personal record department was seventh-grader Alex Rogers. Rogers rebounded from missing the conference championships by running a new lifetime best of 13:30. That placed him 70th overall. Miles Sturm, who has only been able to run in a few races this season, finished 211th in 17:07.

In the middle school girls race Ket White was the team leader. She had a fast 7:37 first mile and despite fading a bit in the second half of the race she bettered her personal record to 16:06. White finished 117th out of the 214 runners.

Alejandra Erazo posted an 8:23 first mile then ran the second, more difficult mile, equally as hard. That gave her a final time of 17:38, good enough to finish 167th overall. Aza Hurwitz, matched pace with Erazo during the first mile with a split of 8:24. She finished the two-mile course in 18:04 to earn 171st.