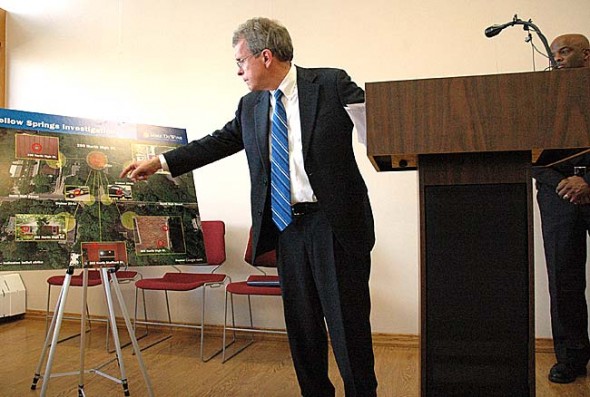 Ohio Attorney General Mike DeWine delivered the finished Bureau of Criminal Investigations, or BCI, report on the shootout and death of villager Paul E. Schenck on Tuesday, Nov. 12, at 9 a.m., to an overflow crowd at John Bryan Center.

Click here to read Attorney General Mike Dewine’s press release on the conclusion of the investigation of the shooting death of Paul E. Schenck and statements regarding Ohio’s mental health system. A link to DeWine’s complete statement is at the bottom of that post.

An overflow crowd of about 75 press and community members crowded into Rooms A and B of the Bryan Community Center today at 9 a.m. to hear Ohio Attorney General Mike DeWine deliver the finished Bureau of Criminal Investigation, or BCI, report on the July 31 shootout that ended with the death of villager Paul Schenck.

After delivering a detailed rundown of events leading up to the shootout and Schenck’s death, DeWine emphasized the event as indicative of society’s failure to help those with mental illness.

“This tragic shooting makes it vividly clear that  that this is about much more than law enforcement,” DeWine said, citing mental illness, alcohol abuse and the access to weapons as contributors to the event.

The report on the night’s event was drawn from more than 80 interviews with law enforcement, neighbors and family members, and about 135 reports on various aspects of the incident,  DeWine said.

According to the report, the incident began with a 911 call from Schenck’s home, which came either from Schenck or his son, who were having a domestic disturbance. Both suffered injuries. Officer Patrick Roegner was the first to respond and gathered information from family members who lived next door to Schenck, while Officer Joshua Knapp was the first to approach Schenck’s door. Knapp repeatedly requested that Schenck open his door and Schenck refused, according to the report, stating that Schenck stated repeatedly that he didn’t want to get hurt or to hurt anyone. However, the interaction between Schenck and the officer escalated and Officer Roegner joined Officer Knapp, with both attempting to push in Schenck’s door. The officers heard several gunshots from inside the home and called for police backup, the report stated. Seventy-one officers and nine state troopers responded to the call, and over the next few hours Schenck fired 191 shots, according to the investigation.

The police fired six rounds, and five came from the weapon of a Greene County Sheriff’s Department sniper who was lying on the ground about 45 yards from Schenck’s house. When, several hours into the shootout, shots coming from Schenck’s house began coming closer, the officer believed his life was in danger, and aimed five shots at the silhouette he could see inside the house. The officer believed he saw the man inside falling, and later Schenck was found dead.

After DeWine spoke on the need for improved services for those with mental health issues, several questions were raised regarding the police attempts at negotiations with Schenck.

For a detailed story on the BCI report, see the Nov. 14 Yellow Springs News.