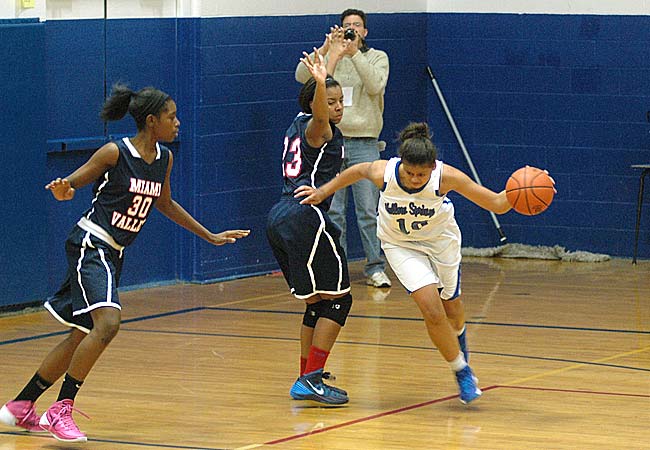 Shanice Wright dribbled around a Miami Valley defender during a YSHS home loss earlier this week. (Photo by Megan Bachman)

YSHS girls varsity basketball team snapped a four-game losing streak on Thursday night when they toughed out a 38–24 victory over Dayton Christian. The Lady Bulldogs pulled out to a 16–5 lead by the end of the first quarter, and never turned back. They moved to 4–4 (2–2) on the season.

After a 3–0 start, the girls varsity basketball team then went on a four-game slide, with losses in recent weeks to Ponitz, Troy Christian, and Stebbins. And in a hard-fought Metro Buckeye Conference matchup against Miami Valley at home on Monday night, the Lady Bulldogs lost 41–36.

YSHS took a lead into the fourth quarter against the Miami Valley, but couldn’t pull out the victory. Elizabeth Smith led scoring with 15 points, including many clutch free throws, while the team received solid contributions from Shanice Wright (10 points) and Brianna Ayers (9 points). Molly Hendrickson played aggressively all game and Julie Roberts contributed well coming off the bench, according to first-year Coach Jack Hatert. The Lady Bulldogs moved to 3–4 (1–2 in the MBC).