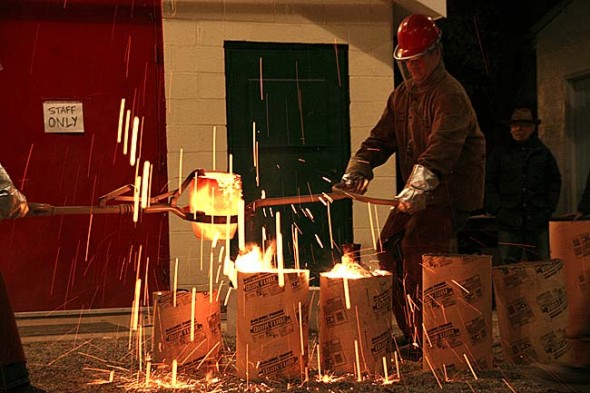 Several hundred villagers showed up at Antioch College campus in chilly October to witness the first bronze pour and grand finale of the two-week National Bronze Sculpture Symposium. The bronze pieces created by the four sculptors-in-residence will be displayed in public spaces in the village, and those created by Yellow Springs High School students will be displayed somewhere on the high school campus. (Photo by Suzanne Szempruch)

2013 Yellow Springs Year in review: Arts in the village

Local filmmakers Julia Reichert and Steve Bognar worked with WYSO Public Radio to create “ReInvention Stories,” which followed Daytonians who have renewed their lives following the economic crisis.A team of filmmakers and radio producers recorded and cut 70 different interviews in summer of 2012, which were released in 2013 as radio pieces, short documentaries and longer film pieces for the project’s interactive website.

In March, the revived Center Stage community theater group presented Arthur Miller’s The Crucible. The classic play about the Salem witch trials, which functions as an allegory for the McCarthy-era Communist with hunts, was directed by Lorrie Sparrow and produced by Kay Reimers. The theater group put a new spin on the old tale, moving the play through time, with different acts occurring at different points in history. Center Stage employed Chicago fight master Neal Massey to aid the play’s cast in fight choreography.

In September, Center Stage’s production of the 1928 Bertholt Brecht/Kurt Weill musical The Threepenny Opera opened. The production was Center Stage’s most ambitious to date, and professional choreographer Wanda Strukus was enlisted to help the cast of mostly non-dancers in the play’s jazz-influenced song-and-dance numbers.

The Daedalus String Quartet performed as part of the Chamber Music in Yellow Springs series in March. The concert featured the world premier of the String Quartet No. 2 by former Yellow Springs resident Allen McCullough, Ph.D., commissioned by CMYS with the support of the National Endowment for the Arts and the Ohio Arts Commission.

YSHS presented its spring musical, Once On This Island, in April. The one-act play, set in the French Antilles, was directed by Cindy Lincoln, with choreography by Valerie Blackwell-Truitt.

The World House Choir, founded by Cathy Roma, debuted in Yellow Springs in late April, performing as part of the celebrations for Coretta Scott King’s birthday. Roma, who founded the Cincinnati-based Martin Luther King Coalition Chorale and the Cincinnati women’s choir MUSE, named the community choir after the last chapter in Dr. King’s book Where Do We Go From Here? Also in April, Roma brought Dr. Ysaye M. Barnwell, a member of the a cappella African-American women’s ensemble Sweet Honey in the Rock, to Yellow Springs to host a community sing.

The Antioch School’s Older Group put on a musical production of The Lion King, in May at the Clifton Opera House. The play, chosen by the students, featured live music from Antioch School students.

In summer, Tecumseh Land Trust and YS Kids Playhouse teamed up for a series of events called the YSKP “Fais Do-Do Season,” which included summer immersion workshops in theater and music for children, leading up to the YSKP performance of Gaston Boudreaux — The Cajun Robin Hood. Gaston Boudreaux, written by Louise Smith, originally debuted on the YSKP stage in 2002 and addresses the ways in which the construction of a new shipping channel cut through Louisiana bayous affected both human and wildlife residents of the region.

In October, Yellow Springs hosted the first National Bronze Sculpture Symposium. The symposium welcomed sculptors John Weidman of Brookline, N.H., D’jean Jawrunner of Tucumcari, N.M., Susan Byrnes of Cincinnati and local artist Brian Maughan, who were selected by a national committee to take part in the event. The sculptors, over a two-week period, each created three original pieces using an abstract theme, after which one piece from each artist was cast in a public bronze pouring, with the remaining pieces to be cast in Indianapolis and brought back to the village. The public was invited to watch the creation of the pieces at the Antioch College foundry, and were also invited to a number of lectures with artists on the “lost-wax” casting method. The pieces created during the symposium were to have made up a Bronze Sculpture Trail in downtown Yellow Springs.

However, in December, it was announced that three of the four bronze castings poured at the final event at the college outdoor foundry were not successful. Bronze Symposium coordinator Joanne Caputo said that the pieces will be recast, and that the Bronze Sculpture Trail is on track to unveil in June.

YSHS put on its fall production, Almost, Maine in November. The play, directed by Cindy Lincoln, followed nine couples in a fictional New England town and their exploits in life and love, with a touch of humor and the absurd.