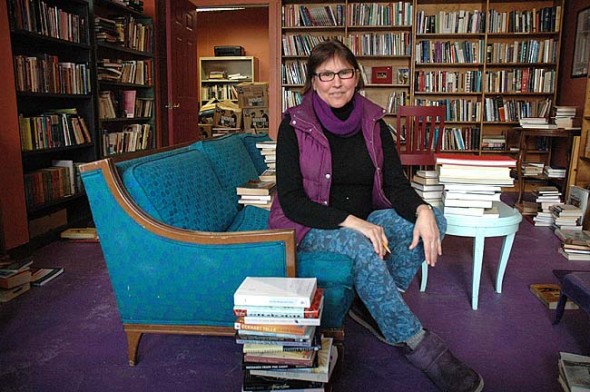 Gail Lichtenfels sorted and stacked used books last week in the new Epic Book Shop, located behind the Emporium on Xenia Avenue. Lichtenfels reopened her bookstore, which she owned since 1974, after closing it four years ago. (Photo by Megan Bachman)

Four years after closing her Epic Book Shop on Dayton Street, Gail Lichtenfels recently reopened Epic as a used bookstore in the downtown retail space vacated last summer by the Main Squeeze juice bar. Lichtenfels has owned the bookstore since 1974.

At the new Epic, at 229 Xenia Ave., already bookshelves are stocked full of everything from literature and politics to children’s books and astrology. Since closing Epic in 2009, Lichtenfels has run a successful online used book business out of an office at the Union Schoolhouse, and recently decided she wanted to make the books she has accumulated available locally as well.

“I end up with a lot of stuff that I would rather put in a shop so it seems like a natural thing to do,” Lichtenfels said of opening up a storefront. While the former Epic was focused on religion, philosophy, mysticism and psychology titles, the new store will sell books on these and many other subjects, Lichtenfels added.

Lichtenfels will pay cash for used books, while she is taking donations as well. Events scheduled to take place at the bookshop include a children’s story time at 1 p.m. on Sundays during which Lichtenfels will read from the Raggedy Ann and Andy series. And her longtime Jungian study group will meet at the store on the fourth Friday of every month at 6:30 p.m.

Epic Book Shop is open every day except Thursdays. Visit the shop for full hours.

Read the Jan. 9 issue of the News for the full story.