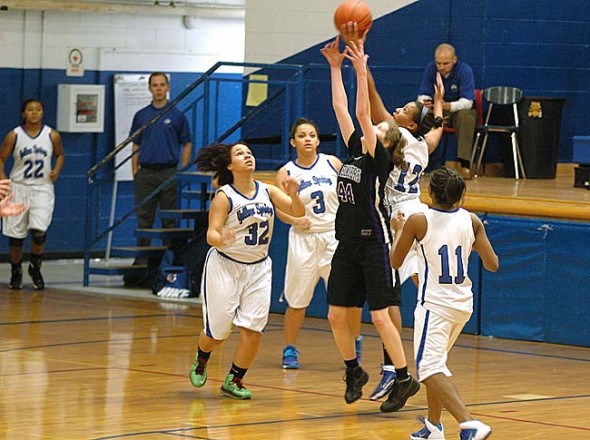 Kennedy Harshaw snatched a rebound over a Landmark Christian player during the YSHS girls basketball team’s 54–38 loss at home on Saturday, Jan 18. Harshaw had eight points on the night. Other Lady Bulldogs are, from left, Ashlei’ Kelly, Rachele Orme and Brianna Ayers. (Photo by Megan Bachman)

This week a strong defensive effort against Metro Buckeye Conference opponent Middletown Christian on Monday gave the Lady Bulldogs a 43–28 win at home. YSHS caused 16 turnovers in the contest. With the win, Yellow Springs improved to 8–7 (5–3 in the MBC).

YSHS freshman Elizabeth Smith scored a game-high 16 points, and continues to lead the conference in points per game, at 15. Junior Shanice Wright added 10 points, eight rebounds and three blocks on the night.

Last Friday the YSHS girls varsity basketball team secured a win at home against conference foe Emmanuel Christian. The Lady Bulldogs recorded a resounding 44–29 victory over the visitors, who remain winless in conference play. Ahead at the the half 21–10, YSHS extended the lead in the third quarter, out of reach of Emmanuel Christian.

Later in the night the YSHS boys varsity basketball team earned its second win of the week, and third on the season, with a 58–37 pounding of Emmanuel Christian. The Bulldogs put the game out of reach in the first half. Coming up big for YSHS was Kaner Butler, who went 7–11 from the field for 17 points. Devon Perry knocked in two triples and ended the night with a double-double (12 points, 10 rebounds).

Earlier in the week, the YSHS boys team picked up its first road win with a 56–40 win against Middletown Christian. It was a team effort for the Bulldogs, with Butler contributing 10 points and Perry, Ethan DeWine and Isaiah Taylor each chipping in nine. Liam Weigand had eight.

The McKinney eighth-grade boys basketball team played a thriller at Emmanuel Christian last week. The crowd and atmosphere were charged with the back-and-forth event with neither team having more than a three-point lead.

“I would have paid to watch this great game,” McKinney Coach Branson Pyles later said.

James Browning and Tony Marinelli led scoring with 22 and 13 points, respectfully. Also scoring for the Bulldogs were Christian Elam and Jalen Lewis.

Strong defense by Zach Brintlinger-Conn and Nasseem Chappelle along with great rebounding by Browning and Chappelle kept up with the pace of the game. But a couple of turnovers and forced shots in the last two minutes doomed the Bulldogs as they lost the game.

On Monday this week, the Bulldogs visited Middletown Christian and after a great beginning with two evenly matched teams, the wheels came off early.

“I made numerous suspect decisions and did not protect Browning and Marinelli from an onslaught of whistles,” Pyles said. “And not adjusting defender Zach Brintlinger-Conn one-on-one with Middletown’s dominant player was another sign of operator error. I take responsibility for the game going south quicker than the polar vortex.”

Jakob Woodburn had a strong game with many offensive rebounds and put back shots. Clay Cook played solid and continues to improve his ball handling and passing skills. Nasseem Chappelle had 13 rebounds along with Browning’s eight. Scoring for the Bulldogs were Marinelli, Browning, Chappelle, Lewis and Woodburn.

A unified defensive front and positive offensive contributions from all nine Bulldog student athletes produced a fulfilling 28–21 road win at Middletown Christian on Monday night. Will Midtbo and Elliot Wiggins handled the ball well and helped their teammates get several good looks at the basket on the offensive end, according to Coach Jason Shae. Jesse Linkhart galvanized the teams defensive effort with intensity and a handful of steals that led directly to many buckets. Teymour Fultz displayed his speed and athleticism by getting out on the fast break and finishing the game with a career-high 10 points.