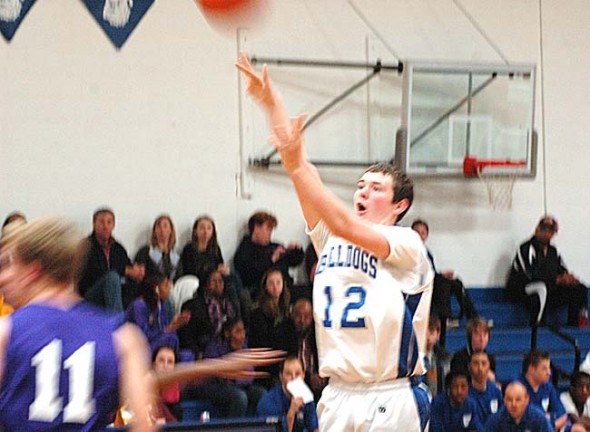 Ethan Dewine went for a three-point gain against Dayton Christian at home on Friday, Jan. 10, when the Bulldog varsity team lost 46–33. (Photo by Lauren Heaton)

At the Shawnee Invite on Jan. 4 three Yellow Springs High School swim records were shattered. Sophomore Aman Ngqakayi broke the 100-yard freestyle record in a time of 51.30, breaking the old record of 52.79 held since 2000 by Avery Whitmore.

This week, after a slow start by the YSHS girls varsity basketball team (the team scored just one point in the first quarter) YSHS battled back against Troy Christian. The Lady Bulldogs fought to take a two-point lead late in the fourth quarter, but ended up losing 42–37 in overtime. They fell to 5–5 on the season (3–3 in the MBC).

Last month, on the last day before leaving for winter break the YSHS girls varsity basketball team beat Dayton Christian 38–24, with 14 points from Brianna Ayers and 13 from Kennedy Harshaw. On Dec. 28, after battling back from an eight-point second half deficit to take the lead in the fourth quarter, the team lost 43–39. The team got 12 points from Shanice Wright, 11 from Elizabeth Smith, and nine from Harshaw. And on Jan. 9 the Lady Bulldogs beat Dayton Christian in a rematch 37–25 and got significant contributions from the entire team.

Last week the YSHS boys varsity basketball team lost two games to drop to 1–9 on the season and remain winless in the MBC.

At Stebbins on Jan. 7, their opponent charged out to a 19–5 lead by the end of the first quarter and YSHS ultimately fell 63–40.

Hosting Dayton Christian at home on Jan. 10, the Bulldogs kept the game close, but poor shooting in the second half was the difference. The Bulldogs shot 33 percent to Dayton Christian’s 45 percent shooting average on the night. Devon Perry led YSHS’s scoring with 13 points. He also grabbed four rebounds. Kaner Butler scored 10 points with five rebounds.

The McKinney eighth-grade boys basketball team continued to gain experience and show improvement as they played two MBC opponents on the road this past week.

On Jan. 9, the Bulldogs handled the stifling Dayton Christian full court press a tad better than in their previous game with the first place Warriors. The Bulldogs goal of improving on their previous point deficit with Dayton Christian was reached, according to Coach Branson Pyles. Leading scorers for the Bulldogs were Tony Marinelli with 10, a great effort by “under the weather” James Browning with 11, Nasseem Chapelle with five, and Zach Brintlinger-Conn with two. Rebounding leaders were Browning, Chappelle, Jalen Lewis, and Sean Smith.

On Jan. 13, the Bulldogs played an “awesome” game at Troy Christian, with flashes of great defense, rebounding, scoring, and some improved teamwork though falling short on the scoreboard, according to Pyles.

“James Browning showed why he is an all conference player with 21 points, and was team leader in rebounding and assists,” Pyles said. Right there in total game rebounds was Chapelle. Christian Elam had his “best game of the year” with improved ball handling, passing, and quick drives to the basket, and free throw shooting.

Brintlinger-Conn, fast becoming the defensive specialist for the team, took two opponent charges, forced three travel violations, and had two steals, according to Pyles. Eli Schell had steals, loose ball dives and great defense. Marinelli had 12 points in two quarters of play before fouling out of the game. There was a greatly improved display of ball handling, defense, and passing by Devin Westmoreland, Jakob Woodburn, and Clay Cooper.

In the first game back following the winter holiday break, the seventh grade boys basketball team played a nail biter at Dayton Christian. Facing an uphill battle on the scoreboard from the very outset of the game, the young Bulldogs pressed and trapped their way back into the contest tying it up at 27–27 midway through the fourth quarter. Ultimately, the team was unable to wrestle away the lead and lost the game 32¬–28. Andrew Clark engineered a significant amount of the comeback tallying 19 points in the contest.

Troy Christian defeated Yellow Springs 43–37 this week by turning up their defensive pressure and intensity. The young Bulldogs have been competitive in virtually every game this season right down to the final buzzer, according to Coach Jason Shea.

“The team is currently 4–3 but could have garnered a couple more wins with an additional critical rebound or a timely shot,” Shea said. “Andrew Clark’s ball handling and 16 points helped give the team an opportunity to win this road game at Troy Christian.”