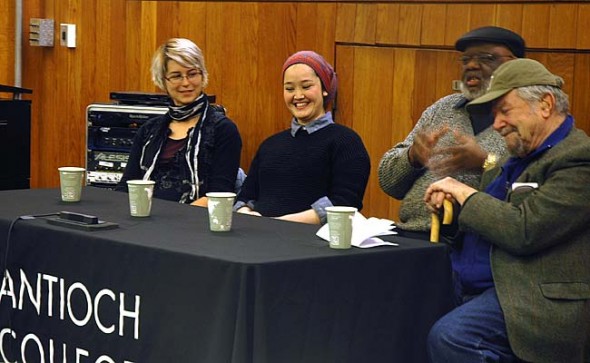 At a Martin Luther King Jr. Day discussion on the Antioch campus, panelists addressed the problems of racial discrimination and inequality. From left are panel members Megan Howes and Nagees Jumahan, both Antioch students, and Antioch alumni Maceo Cofield and Richard Kaplan. Not pictured is Antioch assistant professor of history Kevin McGruder, who moderated the event. (Photo by Megan Bachman)

Columbus resident Kwensi Kambon urged attendees at a Martin Luther King Jr. Day panel session this week at Antioch College to “deputize themselves” and fight against racial inequality and discrimination.

It starts with us, “it does not start with ‘them,’” Kambon said. “King’s approach was focusing on the talents, abilities and gifts that God gave him.”
The panel, whose topic was “Where Do We Go From Here?”, was one of several events on Sunday and Monday that Antioch and the Central Chapel AME Church organized to commemorate King’s birthday. Villagers and visitors also packed the Little Art Theatre for the screening of a rare documentary film on King’s life and the AME Church was overflowing with people during its annual celebration that included music, speeches and peacemaker awards.

“We came to Antioch because we wanted to be with a like-minded community where we could see a diversity in action,” said Kambon, who arrived from Columbus with his wife, Tomisena. Kambon said that they were especially encouraged by the participation of local seniors in MLK activities and the variety of ways the town honors King.

“In many places, there’s just a speech [for MLK day] but I’ve heard all the speeches,” Kambon later said. “When you see the community that has so many ways of remembering King, it jump-starts you.”

At Monday afternoon’s sparsely attended panel session, which drew mostly college staffers and local residents, four current and former Antioch students from the Class of 1949 to the Class of 2017 discussed King’s legacy in the context of the problems still facing racial minorities, woman and the poor on campus and in the country. Panelists agreed that while some progress has been made, there is a still a long way to go, and suggested primary education reform, addressing the underlying economic forces, teaching black history and sparking conversations about race and privilege.

But panelist Maceo Cofield, a 1971 Antioch graduate, said that the “truth has been hijacked” and the language co-opted, making it more difficult to have meaningful conversations about oppression today. Cofield, who coordinates the University of Dayton’s minority leaders program in its school of engineering, added that more choice in primary education or better schools are also not sufficient to solve the problem. Instead, an economic system that exacerbates inequality needs to be transformed to alleviate poverty, since “it’s very hard to listen at school when you’re hungry,” he said.

“When we talk about what’s going on with African Americans, Latinos, and poor white young people, we have not discussed how we integrate them into our economy,” Cofield said, adding that if our economic system was a true “meritocracy” then the rich would lose their privilege as the poor would rise up with better education, which is not the case.

Panelist Richard Kaplan, an 89-year-old retired documentary filmmaker and Antioch alum, argued for teaching the history of the civil rights movement to children. To that end he is trying to get his 30-minute film about King, Legacy of a Dream, into every classroom in the country.

“There is a whole generation of kids out there that don’t know a damn thing about our history,” Kaplan said. “Hopefully using a film like Legacy of a Dream and all of the attendant discussion will be useful in giving them a better perspective on where we should go from here. Whether we will or not is another question.”

Local resident David Perry agreed from the audience, saying that more black history should be taught in schools and homes throughout the year, instead of just on MLK day and in February.

“So much black history has been lost,” Perry said. “There are so many other black leaders other than MLK — it’s about more than just MLK and his message and movement.”

Antioch third-year student Nargees Jumahan, a 21-year-old native of Afghanistan who emigrated to the U.S. when she was 11, said that Americans don’t like to talk about their history and that she has found it strange that the country “compartmentalizes” history into months and holidays. She pointed out that many Antioch students treated MLK Day as a day off, since the only students at the discussion were two panelists, three working the audiovisual system and a friend that came with her. Jumahan added that current Antioch students are “only open-minded to open-minded people” and that her generation tends to confront such issues from purely an intellectual perspective.

Antioch Dean of Community Life Louise Smith added from the audience that Antioch needs to do a better job of recognizing oppression among, and creating “safe spaces” for, those of different identities — gender, sexual orientation, race, class, religion — and that it starts with conversation.

“The idea of an honest conversation in [the Antioch] community is really important to counteract this idea we’re in a post-racial culture and that there aren’t any problems,” she said.