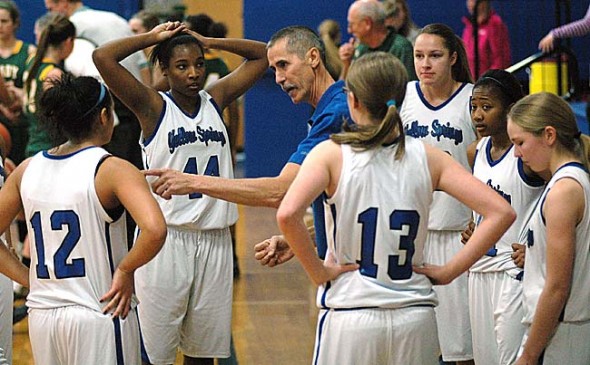 Coach Tim Barga instructed the YSHS varsity basketball team during a critical Metro Buckeye Conference matchup in January. The team won the game 34–27 to take a share of the league title for the first time in school history, and went on to win sectionals for the first time since 1987. Players are, clockwise around their coach from left, Maryah Martin, Angela Allen, Paloma Wiggins, Anna Mullin and Molly Hendrickson. (Photo by Megan Bachman)

It was a season of firsts for the small but mighty Yellow Springs High School girls varsity basketball squad. In February the team of eight players won a share of the Metro Buckeye Conference title for the first time in school history, finishing with a 10–2 league record.

After going 15–7 in the regular season, the Lady Bulldogs then made a deep run into the postseason tournament. They clinched their first sectional title in 25 years on Feb. 23, smoking Cincinnati Seven Hills 44–24. During the season, the team also delivered the 500th win for their coach, Tim Barga. Leading players were seniors Maryah Martin Angela Allen and Paloma Wiggins and juniors Kennedy Harshaw and Brianna Ayers. Martin was selected as a District-15 All-Star, Coach Barga was District-15 coach of the year and Jack Hatert was assistant coach of the year.

The YSHS boys basketball team finished the regular season 15–10 (8–4 in the MBC) before winning several post-season games. In the Division IV sectional tournament in February the team wiped out the Tri-County Panthers 55–42 and blew past Arcanum 59–49, only to fall for the third time this year to Troy Christian in the sectional final 69–40.

It was a successful season for the girls track and field team, which finished second at the Metro Buckeye Conference Championships in May and sent six athletes to regionals in June.

The top Lady Bulldog finisher at regionals was senior Alex Brown, who came in sixth place out of 14 runners in the 1600-meter run with a season-best time of 5:31.12. Senior Lois Miller concluded her illustrious YSHS running career with an 11th-place 12:33.68 showing in the 3200-meter run at regionals. Miller leaves her name on several school records, most notably the 3200-meter run with a career best of 11:44.73 when she repeated as district champion in 2013. Senior Angela Allen, in her third and final regional appearance, placed 13th in the discus competition with a toss of 94´07˝ and broke the school record in 2013 with a toss of 107´9˝.

Bulldog tennis players had a great opening round in the sectional tournament in May. In singles Gabriel Day had a dominant win over his Bellefontaine opponent, 6–1, 6–2. Meanwhile, the doubles team of Nick Miller-Jacobson and Grant Riegelsperger also dominated Bellefontaine 6–3,6–1.

The baseball team won its first game since 2010 with a 10–0 pounding of Meadowdale, during which Ethan Dewine struck out 10 batters and pitched a complete game shutout. It was the team’s first complete season in as many years. 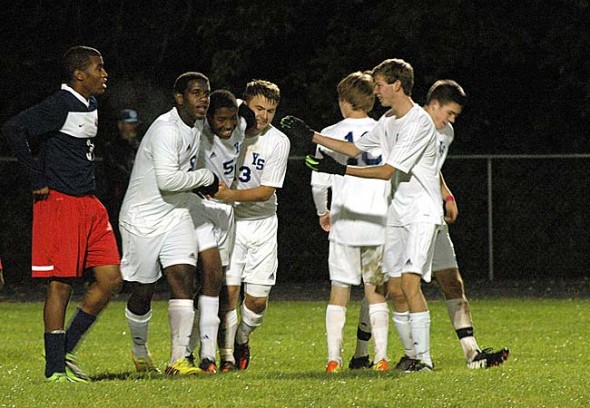 Players on the YSHS varsity soccer team celebrate a goal during the team’s 6–2 defeat of Miami Valley in the district tournament in October. The team ultimately fell in the district finals but ended the season as the outright MBC champs. (Photo by Lauren Heaton)

In October, the Yellow Springs High School boys soccer team won the Metro Buckeye Conference outright for the first time since 2008 with a 3–1 home win over Dayton Christian. They finished 13–1–2 on the season (undefeated in the MBC) and marched through the post-season tournament, reaching the district finals for the seventh year in a row. But a 2–1 away victory at No. 4 ranked Central Catholic on Oct. 1 was the highlight of the season as the Bulldogs beat their Springfield rival for the first time in eight years.

Midfield sweeper Jared Scarfpin, a junior, was the district and conference player of the year and made first team All-State. Ian Chick and Hafiz Mensah were additionally selected to the first team All-District, with Eric Lawhorn on the second team and Joe Plumer and Grant Reigelsperger on the third team. Coach Ben Van Ausdal was selected as the MBC coach of the year for the second straight year.

YSHS cross-country runner Charlotte Walkey,a sophomore, was the lone YSHS runner to qualify for regionals with a finish of 21:33 in the 5-kilometer race at the Dayton District Cross-Country Championships in October. Walkey finished 11th overall and led the Lady Bulldogs to a fifth-place finish in the team standings.

Golfer Rachele Orme finished her senior season as the best female golfer in school history. Orme won the girls sectional tournament in September with an 83 at the WGC Golf Course in Xenia. She qualified for districts for the second year-in-a-row in the fall, a feat no other girl in school history had accomplished, according to golf coach Mike Reichert.

Orme led the first girls golf team in school history in 2013 and also posted a school record low of 35 strokes over nine holes (one under par) at its first match at Locust Hills Golf Course in Springfield in August.