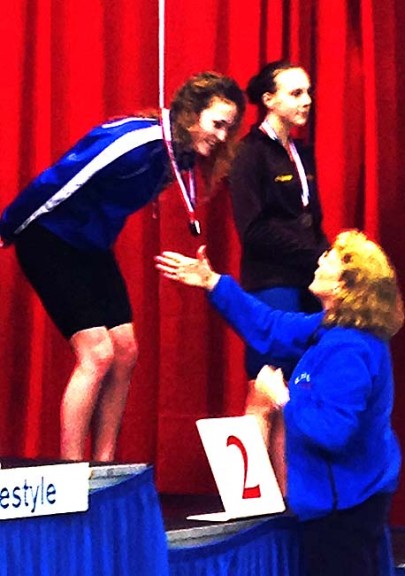 YSHS freshman Olivia Chick accepted a medal for her second-place finish in the 100-yard freestyle at the Southwest Ohio Division II District Championships, held at Miami University on Feb. 14. Chick swam the race in 51.25 seconds, a new school record and good enough to qualify her for this weekend’s state meet. Chick also qualified in the 200-yard freestyle. (Submitted photo)

A new Chick heads to state

Even though she’s a high school freshman, Olivia Chick has been to the state swim meet before.

Chick watched from the stands as her older sister, Erika, competed for Yellow Springs four years in a row at the highest stage for high school swimmers.

Now Olivia Chick will pick up where her sister left off and chase that elusive state title, though this year she’ll focus more on the clock and would be happy enough to finish in the top eight, she said.

“I just want to get best times and continue to drop,” Chick said.

Chick qualified for state with a speedy 51.25 second-place finish in 100-yard freestyle at the Division II Southwest District meet last weekend at Miami University in Oxford. It was her fastest time of the year and with it she set a new school record, improving on sister Erika’s 2012 record by two seconds. Chick will also compete at this weekend’s state meet in the 200-yard freestyle after a third-place district finish in that event, at 1:52.14.

Chick will be seeded fourth in the 100-yard freestyle and seventh in the 200-yard freestyle at the state meet, to be held at the C.T. Branin Natatorium in Canton. For her district performances, she was recently ranked in the top 20 of all Division I and II athletes in the state.

Reflecting on her accomplishment, Chick said she calmed her nerves well before the start, a trademark ability that she says comes in part from watching her sister swim major events, but also from her own time on big stages such, including the USA Swimming Central Zone Championships and the Ohio Junior Olympics.

Chick said she also took to heart some advice from YSHS swim coach Kate Johnson, to “Leave it all in the pool” and “Make it hurt, because it will all be over fast.” Johnson explained her advice: “When I told her to ‘make it hurt,’ I meant literally, go as hard as you can. I told her if she couldn’t get out of the pool, I would be there to help her out.”

Johnson said that Chick is one of the most dedicated and hardworking swimmers she has ever met and is one who “sets goals for herself and doesn’t let herself not achieve them.”

Before a big race, Chick can be seen wearing headphones, listening to music that pumps her up — Beyonce is a favorite — in order to get herself excited and eager to “drop time,” she said. Chick hones in on her coaches’ instructions for the race, but mostly she relies on the training that comes from eight to nine practice sessions per week.

Chick started competitive swimming at age four as part of the Yellow Springs Seadogs and now swims every day. She gets up at 4 a.m. three days a week to swim before school, then goes back to the pool immediately after class for two more hours of practice. She also puts in grueling 3.5-hour practices on the weekends. In addition to the YSHS swim team, she is a member of the nationally competitive Dayton Raiders Swim Club.

During an impressive freshman season, Chick chased her sister’s school records, and in January, finally bested Erika in the 100-yard freestyle with a new record of 55.41, which she improved to 51.25 at districts (Erika, who graduated in 2012, still holds seven individual YSHS swimming records). The younger Chick also set a new school record in the 50-yard freestyle this year, in 25.3 seconds, edging out a record set by Elizabeth Malone in 2012.

Chick said she has long enjoyed a healthy rivalry with her sister, who teased her that she wouldn’t break her record this year. But more than anything, Erika has been supportive, Chick said. She regularly receives texts from her older sister saying “I’m proud of you” after a good race.

After the state meet, Chick has a few weeks off before she heads to the National Club Swimming Championships in Orlando, Fla., with the Dayton Raiders, she said. Actually, it’s a few weeks “off of meets,” Chick clarified; she’ll continue to practice every day.

As for her practice schedule interfering with her social life, Chick said she “makes it work,” even if that means hanging out with friends with her hair wet. And while she tried to get into other sports such as volleyball and soccer, swimming has been her passion, and she plans to keep it that way. In a few years, Chick hopes to earn a scholarship to swim at the college level.

“I couldn’t see myself not swimming,” Chick said.