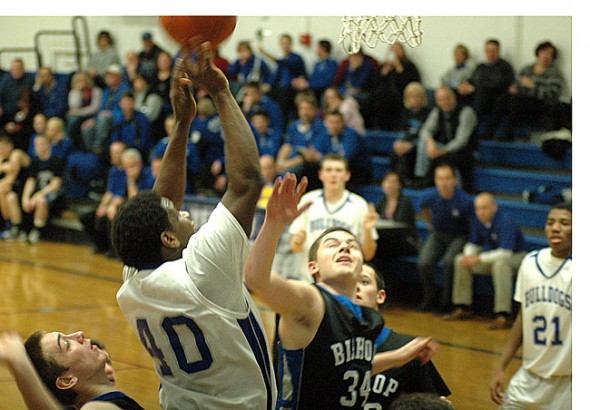 Joe Plumer puts one up for the Bulldogs in the home team’s loss to Div. II Bishop Ready of Columbus on Friday, Feb. 14. Yellow Springs lost 69–37. (Photo by Lauren Heaton)

Two seconds for a sprint swimmer is a long time. So when Yellow Springs High School sophomore Aman Ngqakayi shaved a full two seconds off of his district swimming performance between last year and this, it’s a feat to be congratulated.

“He dropped a lot of time this year,” YSHS swim Coach Kate Johnson said of Ngqakayi, in large part because of his competitive spirit.

“Aman swims with his heart and he swims to win,” she said. “If Michael Phelps is next to him, [Aman] will try to beat him.”

Ngqakayi finished 12th in the 100-yard freestyle at the Division II Southwest District meet last weekend at Miami University in Oxford with a time of 49.89 seconds, a new school record. Last year he swam the event in 52.11. Ngqakayi also finished 14th in the 100-yard breaststroke in 1:03.13, improving on last year’s 1:05.13.

Ngqakayi also finished the year with a new school record in the 50-yard freestyle.

The accomplishments of Ngqakayi and Olivia Chick, who qualified for states, are even more impressive considering what a challenging season it has been, Johnson said. This year there were just five girls and two boys on the swim team and many meets were cancelled due to weather.

“It’s been a really rocky season, but the kids are really dedicated,” Johnson said.

Johnson is optimistic that the YSHS swim program has a bright future. As the coach of the Yellow Springs Seadogs summer swim team over the last two years, Johnson has helped build that program from 75 to 150 swimmers, including many middle school students who will soon enter YSHS, and the team is starting to win, she said

“When I arrived hadn’t won a swim meet in 10 years and the past two seasons we’ve won about 50 percent of our meets — we’re growing,” Johnson said.

New Miami was no match for the Lady Bulldogs during the opening round of the sectional tournament on Saturday, Feb. 15. The number six-seeded YSHS girls varsity basketball team, which finished the regular season 8–8, came away with a 35–19 win over #10 New Miami. If they can get past #8 Cedarville on Wednesday, the Lady Bulldogs play in the sectional semi-finals on Saturday, Feb. 22.

A winning week for boys

The YSHS boys varsity basketball notched two victories and suffered one loss over the week, improving to 5–15 (4–7 in MBC) as the regular season comes to an end.

After cruising past conference foes Miami Valley on Tuesday (45–23) and Middletown Christian on Thursday (53–35), the Bulldogs lost to Bishop Ready in front of a home crowd on Friday night (69–37).

On Thursday, Feb. 13, the day before Valentine’s Day, the McKinney seventh-grade boys basketball players demonstrated their “love for the game” by giving their best collective effort of the season. Although the tournament semifinal game against Dayton Christian slipped away 41–29, the Bulldogs had hustled and sweated their way to a very successful 8–5 season, according to Coach Jason Shea.

“Our student athletes matured as young men and as basketball players throughout the season and are poised to improve next season,” Shea said. “As we have reached the end of this season, I would like to thank the parents, the community, the fans and, most importantly, each young man that suited up and made a contribution to the mighty, mighty Bulldogs.”