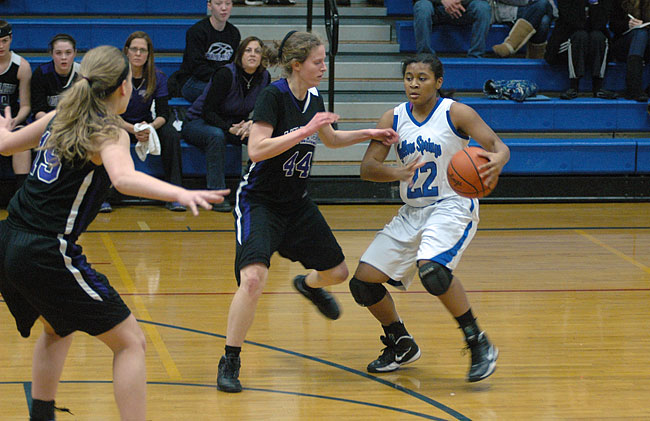 Girls basketball on a roll

Having won four of its last five games, the Yellow Springs High School girls varsity basketball team is on a roll. The Lady Bulldogs (9–8, 6–4 MBC) traveled to Shroder in Cincinnati on Saturday after a big road win against Xenia Christian on Thursday.

YSHS beat the conference foe 48–40 with strong team play — nine of the roster’s 12 players had points on the night. Leading the way was Kennedy Harshaw, with 14 points, Brianna Ayers with nine and Ashlei Kelly, with eight. Also scoring for the Lady Bulldogs were Shanice Wright, Elizabeth Smith, Rachele Orme, Molly Hendrickson, Anna Williamson and Anna Mullin.

On Friday, the young YSHS boys varsity basketball charged out to a 3–0 lead at Xenia Christian but ultimately fell 62–41 on the night. The team started four sophomores and a freshman in the loss. Kaner Butler led the Bulldogs (3–15, 2–7 MBC) with 12, Devon Perry put in nine and Isaiah Taylor scored eight.

Read the Feb. 13 issue of the News for more sports results.