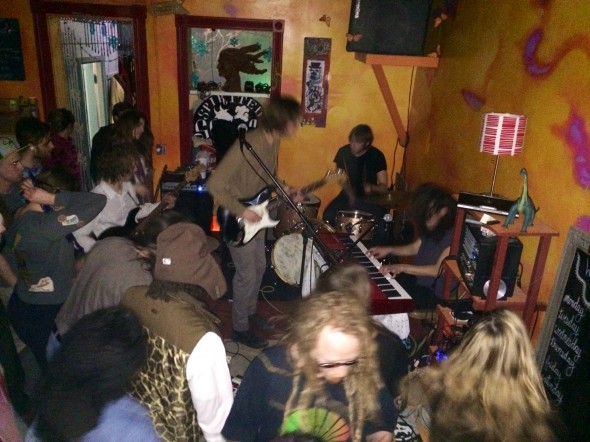 BLOG — One night of live music

For a bumping live music scene, Sixth Street in Austin and the Williamsburg neighborhood in Brooklyn had a competitor in downtown Yellow Springs last Saturday night.

While two popular Dayton rock bands packed Peaches and the Gulch featured blues and rock ‘n’ roll tunes with a local drumming legend who played at Woodstock, a younger crowd pulsed to an Orlando electro-pop act under strobe lights at the Spirited Goat Coffee House on Dayton Street, and later screamed as local headliner Speaking Suns boasted the kind of confident, indie-leaning rock that feels ahead of its time.

Dayton rock ‘n’ roll/Americana outfit The New Old Fashioned was at Peaches to release its latest album, “Ladies,” a 7-inch vinyl put out by Yellow Springs’ Toxic Beauty Records. Opener Shrug, a Dayton band that has been around since 1994, albeit in different incarnations, warmed up the crowd.

Down at the Gulch, “Crazy Joe” Tritschler paired up with Duke Dewey to play early rock ‘n’ roll hits, along with Tritschler’s signature rockabilly, all through homemade vintage tube amplifiers. At one point the duo covered Eddie Cochran’s 1958 hit “Summertime Blues,” which Dewey apparently played live with the band at the Fillmore in San Francisco in 1960s.

The Spirited Goat, the newest live music venue in town, hosted to a younger college-aged crowd for electro-pop acts Terror Pigeon Dance Revolt, of Nashville, and Michael Parallax, of Orlando, before Speaking Suns took the stage with a high-energy set of indie rock.

Speaking Suns’ bassist Conor Stratton, who helped organize the Spirited Goat show as part of his new independent label Great Guys Records, wants to bring that pioneering new sound to part of Ohio dominated by bluegrass and your more typical rock and jam bands. And by helping Speaking Suns and other Ohio acts put out albums and tour in support, he hopes to propel them to stardom.

“I realized that we have all this talent out of Yellow Springs and we’re all friends, so we we can have power in numbers,” said Stratton, a 2009 YSHS grad who now lives in Athens, Ohio, on launching the label last year.

Speaking Suns is also looking to raise $2,600 with a Kickstarter campaign to print copies of its first album. Visit and donate here: https://www.kickstarter.com/projects/1741788185/speaking-suns-first-printed-album?ref=search

Read the full story on Great Guys Records and Speaking Suns in the March 6 issue of the News.