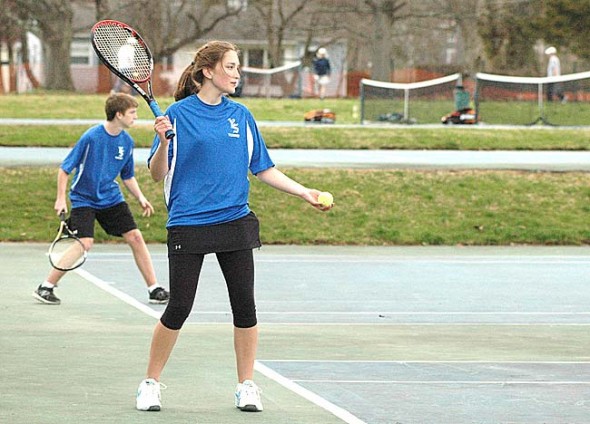 Freshman Kasey Linkhart prepares to serve on the second doubles court in the Yellow Springs High School varsity co-ed tennis team’s match against Beavercreek on Wednesday, April 9. Visible behind her on the first double court is sophomore Henry Potts-Rubin. (photo by Megan Bachman)

Bulldog Sport Round up

TRACK AND FIELD
Boys and girls stand out at KTC
The Yellow Springs High School track and field teams competed against former rivals in the now-defunct Kenton Trace Conference at the Old KTC Invitational last weekend. Going up against mainly Division II teams, the girls took fourth place out of seven teams and the boys finished in fifth place out of nine teams.

Harshaw, Walkey earn firsts
The girls track and field team was led by first-place finishes earned by Charlotte Walkey in the 800 meters (2:32.4) and Kennedy Harshaw in the shot put (31´4˝). Walkey also earned a third place in the 1600 meters (5:49.1).

Relay, Johnson lead boys
In the boys track and field meet, the 400-meter relay squad of Aaron Sherwood, Bryce White, Hafiz Mensah and Ed Johnson had the top performance for the Bulldogs (they finished in third place in 47.1 seconds), along with Oluka Okia, who came in third in the high jump (5´8˝).

Kaner Butler went on to take fourth in the 110-meter hurdles (19.3 seconds), Bryce White finished fourth in the 200-meter in 24.4 seconds and the 800-meter relay team of Hayden Orme, Aaron Sherwood, Okia and Hafiz Mensah finished in 1:42.3, good for fourth place.

“It will be interesting to watch this team through the season as the results from Waynesville indicate that some McKinney School records could be broken this year,” Coach Peter Dierauer said.

Standout thrower Amani Wagner won the shot put competition with a toss of 30´7˝ which is only 3.5 inches away from her own record mark. The boys 4×100-meter relay team (Clay Looper, Dharma Crocker, Calum Siler and Eli Schell) ran a 59.58 which is less than one second from the current record. The girls 4×100-meter squad (Cayla Brown, Lily Bryan, Raven James and Alejandra Erazo) ran a 60.39 which is about 1.5 seconds off the record mark. The girls seventh-grader 200-meter sprinters Cayla Brown (seventh place in 32.90) and Lily Bryan (eighth place in 33.06) show a lot of promise for the season to come. The next opportunity to break records on the track for the McKinney team is this Thursday April 17, 2014 at the first home meet of the season starting on the John Gudgel track at 4:30 p.m.

SOFTBALL
Rally falls short at Meadowdale
The Yellow Springs High School girls softball team played against Dayton Meadowdale Friday night and found themselves trailing by a 15–1 score when they went to bat in the bottom of the second inning. But that was no problem, according to Coach Jim DeLong.

“The team was just nervous in the early going and I knew they could come back,” DeLong said. “I huddled them up before we batted, told them it’s time to hit and score some runs and we’ll see what happens.”

And hit they did. YSHS outscored Meadowdale 19–7 the rest of the game, but their six-run rally in the last inning came up just short as they lost by a final score of 22–20.

Senior Sierra Lawrence was both the hitting and pitching star of the game. On offense she went 2–2 with a homerun and three walks and had three RBIs. On the pitching mound Lawrence pitched a complete game and after a shaky start shut down Meadowdale as she garnered 10 strikeouts in five innings.

“Sierra did it all today,” DeLong said. “She hit the homerun on offense and then was unhittable on the mound after she settled down and gained her confidence.”

Other sluggers on offense were freshman Amelia Gray, who was 2–3 with a double, two walks and three RBIs and junior Jesi Worsham who scored three runs and turned three walks into five stolen bases. Sophomore Nekyla Watkins made her first career start a successful one as she went 1–2 with a double and three walks and scored two runs.

YSHS also played at Troy Christian last week. Despite scoring six runs and outhitting their opponents, in the end the walks hurt the team’s ability to compete as Troy Christian used the walks to take an early lead and used them to pull away from the Bulldogs.

Gaunt Park diamonds to open
Due to poor field conditions, the first two home games of the season for the YSHS baseball and softball teams were cancelled. But the Gaunt Park diamonds will most likely be ready for games this week, according to YSHS Athletic Director Steve Rossi.

The delay in preparing the fields by Village maintenance staff was because of cold and wet winter weather, Rossi said. But with the addition of more dirt and dry weather in the forecast the fields should soon be playable, he said.