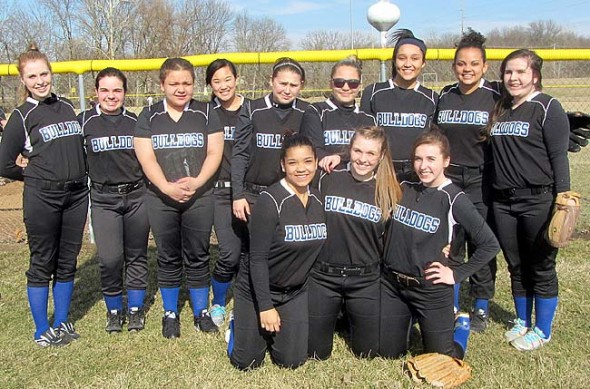 SOFTBALL
Strength in numbers for girls
Four years ago the Yellow Springs High School softball team was unable to field a team due to lack of numbers. Times have changed since then as this year’s team has 15 girls on the roster, according to third-year coach Jimmy DeLong.

“When I was first hired three years ago, my first priority was to improve numbers by showing the girls that softball could be a fun and enjoyable sport,” DeLong said. “Now I can focus on teaching the fundamentals of the game and building on the existing softball talent that resides in the school system.”

This year’s team also has something that last year’s team did not have: seniors. Three seniors are on this year’s roster and will be key to the team’s success.

Senior left-handed fireballer pitcher Sierra Lawrence, who was second in the MBC conference last year in strikeouts with an average of more than one strikeout per inning, returns with a full season of pitching under her belt and two years of pitching lessons from renowned pitching legend Pete Cook.

Another senior leader on the team will be senior first base player Rachele Orme. Orme returns for a second season and Coach DeLong has high expectations for her.

“Rachele is what I call a “five-tool” player,” DeLong said. “Rachele can hit, hit for power, run, field, and throw with the best of players. Rachele is my best pure hitter.” Orme batted over .400, averaged over one RBI per game, led the MBC with three home runs in only nine games, and according to Coach DeLong, played outstanding defense as well at first base.

The other senior on the team, Olivia Ramage, sat out last year after playing as a sophomore and is pegged to be the starting left fielder.

“Olivia is my best defensive outfielder,” DeLong said. “She gets a good read on the fly balls and is aggressive in the field.”

The infield will be anchored by junior Evelyn Green at third base, junior Jesi Worsham at shortstop and freshman Amelia Gray at second base. Green returns for her third season at the hot corner.

“Evelyn has the strongest arm on the team which is nice to have at third and she has really improved her footwork this year,” DeLong said.

Worsham is a versatile player who is also the number two pitcher. Worsham batted leadoff last year, was the team’s best bunter, led the team in stolen bases, and also led the team with a .458 batting average, according to DeLong. Gray, in her first year of organized softball, is “a hard worker and smart and very determined and dedicated to improving,” DeLong said.

The critical catching position will be held down by sisters Chelsea and Danny Horton.
Other players on the roster are sophomores Shanice Wright, Nekyla Hawkins, and Ashley Longshaw, as well as freshmen Dani Worsham, Aliza Skinner, Rachel Hiatt, and Victoria Willis. Assistant coaches are Shannon Cox, Bubba Worsham, and Maria Prether. Home games are played at Gaunt Park at 5 p.m., with the home opener scheduled for Friday, April 11.

TRACK AND FIELD
YSHS led by veteran coaches
Vince Peters, the girls coach for 32 years, and John Gudgel, the boys track coach for 33 years, will once again lead the Yellow Springs High School track and field teams. This season is sure to be an exciting one, with two important meets to be hosted at Yellow Springs High School — the Bulldog Invitational on May 9 and the Metro Buckeye Conference Championships on May 17.

Harshaw, Walkey key for girls
The YSHS girls track team is a solid baker’s dozen in size with two seniors returning from last year’s team. According to Coach Peters, strength will be in the sprints and possibly the hurdles with a strong group of freshmen to provide depth in the relays. Kennedy Harshaw (regional qualifier in the shot put) and Charlotte Walkey (4×800 relay regional qualifier and cross country regional qualifier last fall) have the experience of advancing to competition at the regional level, Peters said.

Boys track team fields 22
The YSHS boys track and field team has 22 team members, which is the highest number of athletes in over eight years. This year there is depth in every event which will make for a better overall team albeit a plethora of newcomers populate the roster as only eight members of the team lettered last year, according to Coach Gudgel.