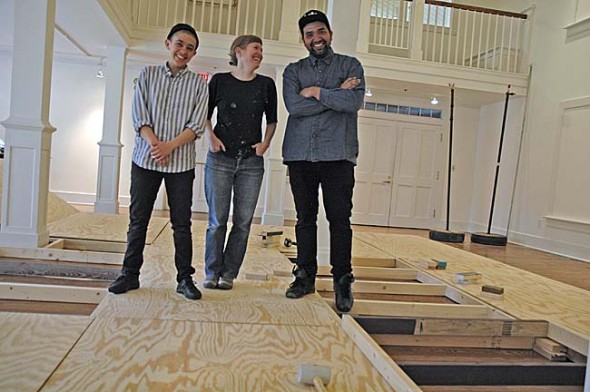 Co-curators of “Living as Form (The Nomadic Version)” are Antioch visual arts professor Sara Black, center, and Antioch artists in residence Jillian Soto, left, and Anthony Romero, right, who recently worked on the exhibition at the Herndon. The three artists will host the first of three weekly conversations about the exhibit at 7:30 p.m. Wednesday, April 23. (Photo by Megan Bachman)

Conversations on activism and art at Antioch

When aesthetics or theatrics are used in everyday social activism, is it also a kind of visual or performance art?

At Antioch College, which has staked out a legacy in both activism and art, that question will be explored in a new exhibit at the Herndon Gallery in South Hall that runs April 18 through May 16. The first of three weekly conversations on the exhibit is 7:30 p.m. Wednesday, April 23, at the Herndon.

“Living as Form (The Nomadic Version)” is an international exhibit of socially engaged art featuring archived documentation from 22 projects. Originally presented by Creative Time in New York City in 2012, “Living as Form” challenges traditional notions about art’s boundaries, contributing to a new category of contemporary art sometimes referred to as “social practice,” according to co-curator Sara Black, assistant professor of visual art at Antioch.

“It’s so contemporary that it is still finding its feet in the art historical cannons, and there’s so much debate about what to call it,” Black said. “It’s testing the boundaries of what we comfortably call art.”

The exhibit is a collaboration of Black with Antioch artists-in-residency Jillian Soto and Anthony Romero, Chicago-based performance artists who arrived on campus last week to teach, create and curate for three months. 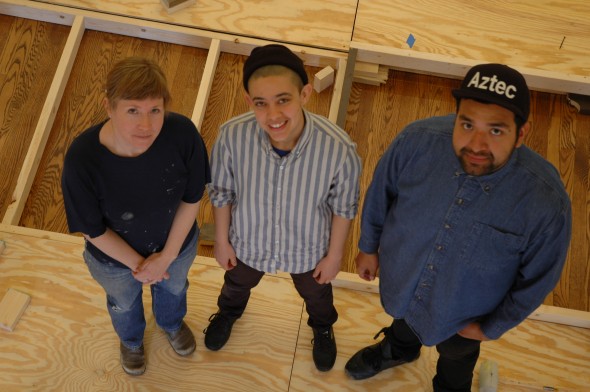 The “Living as Form” projects are organized by theme and will be presented in three sections. Weekly conversations with Antioch art faculty and residents showcasing work on each theme will begin at 7:30 p.m. Wednesday, April 23, with a discussion of “Occupation and Convening.”

Explained Soto of the first theme: “Many of the projects involve people occupying territories they aren’t supposed to or convening in public places you wouldn’t normally convene to perform an action or sing.” Other conversations will be on “Borders and Access” on April 30 and “Difference” on May 7.

In addition, two new performance art works were commissioned for exhibit and will be shown on the weekend of May 9–11. Performing is Micha Cárdenas, a transgender artist from California whose work focuses on ending violence against queer and trans people, people of color, indigenous people, youth and sex workers, according to her website. The Compass Group of the Midwest Radical Cultural Corridor will also present a day-long “people’s hearing” on Monsanto, which has been previously held in St. Louis, Mo., Iowa City, Ia., and Carbondale, Ill. Those works will ultimately become part of the archive of projects as it continues to travel around the country.

Read the April 17 issue of the News for the full story.