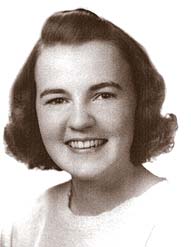 Roberta was the youngest of two children born in Springfield to Wilber E. and Sada (Dodds) Postle. She spent summers with family in Columbus where, at the age of 12, she learned to drive and chauffeured her aunt around Columbus. After the new age requirements went into effect, Roberta’s “chauffeuring” career was put on hold until she obtained her license. She was then able to do her part for the war effort and volunteered as a chauffeur to military personnel at Wright-Patterson Air Force Base.

Roberta graduated from Springfield South High School, and went on to attend Antioch College before earning her bachelor’s degree in education from Wittenberg University and her Master’s in education from Wright State University. Roberta taught at Mills Lawn Elementary School in the late 1960s. After obtaining a certificate of psychology, she was employed as the psychologist for the Champaign County school district.

Roberta was a devoted reader with an impressive library, an avid gardener, an animal lover and a bird watcher. In addition to her home in Yellow Springs, she kept a cabin in Clifton that she and longtime friend Dorothy Hiatt spent many years remodeling and where they worked in the gardens. Roberta and Dorothy loved to travel, and for a few years owned a home in Bogota, Columbia, where they spent time exploring South America.