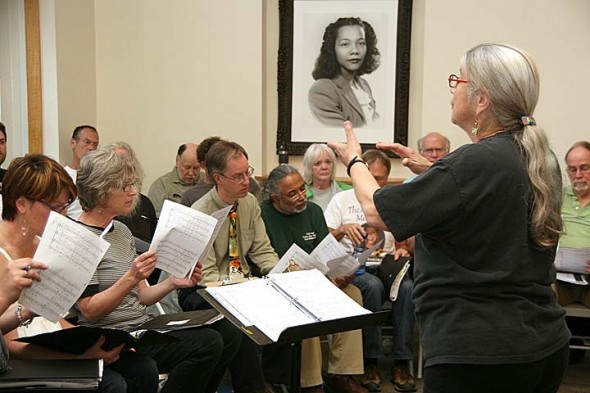 The World House Choir, formed last year in association with Antioch College’s Coretta Scott King Center for Cultural and Intellectual Freedom, is “guided by her spirit,” in the words of choir director Cathy Roma. Now the choir honors King at a celebration of what would have been her 86th birthday.
The World House Choir performs with 70 members at a celebration of King’s birthday at 4 p.m. Sunday, April 27, at the Central Chapel A.M.E. Church, 411 S. High St. The event is free, childcare will be provided and an interpreter is available for the hearing impaired.
Many of the songs selected for King’s birthday celebration harken back to the civil rights era, including traditional African-American spirituals like “Over My Head,” “Sometimes I Feel Like a Motherless Child,” and “Down By the Riverside.” King was a classically trained vocalist who lent her voice to freedom concerts and rallies in support of civil rights causes before and after the death of her husband, Martin Luther King, Jr., according to Roma.
Prior to meeting her husband, Coretta Scott studied music and education at Antioch in the 1940s on a full scholarship through the school’s interracial education program, one of the first African Americans to study at Antioch. King last visited the campus in 2004 to speak at graduation and approved the use of her name for a new center in 2005.
At her birthday celebration, there will also be performances by guest percussionists and vocalists and short talks by McGruder and Erin Smith-Glenn, a Central State University art instructor and portrait artist who drew the striking Coretta Scott King portrait “Queen King.”
Other upcoming World House Choir concerts include a Dayton benefit for Poz4Poz, a Miami Valley organization that provides education and support for those with HIV/AIDS, on July 19, a commemoration of the United Nations’ International Day of Peace in Yellow Springs on Sept. 21 and a local pep rally concert for marriage equality on the eve of Coming Out Day and Yellow Springs Street Fair on Oct. 10.
Read the full story in the April 24 issue of the News.