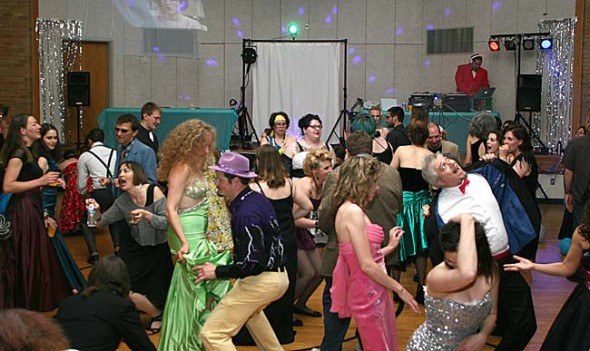 Last year’s “Enchantment Under the Springs” adult prom drew a sell-out crowd of 200 people wearing their cheesiest prom attire. Tickets are on sale now for the second annual adult prom, 7 p.m. to midnight Saturday, May 10, at the John Bryan Center gymnasium, 100 Dayton St. This year’s theme is “Hollywood Edition.” (Photo by Suzanne Szempruch)

Adult prom is back, even better

That was the scene at last year’s “Enchantment Under the Springs” adult prom, where a sell-out crowd of 200 relived the greatest night of their lives.

Adult prom is back, and just like the high school version, there will be a cheesy photo backdrop for official portraits and a vote for Prom King and Queen, while organizers promise none of the wedgies, kick-me signs or high school drama. And instead of a flask hidden in a dress or tux, adult prom-goers can buy their alcohol at the dance.

The second annual “Enchantment Under the Springs” adult prom is 7 p.m. to midnight Saturday, May 10, at the John Bryan Center gymnasium, 100 Dayton St.

This year’s theme — “Hollywood Edition” — means more glitz and glamour and an opportunity to dress like a star, organizers said. Going with the theme is optional, however, and the classic prom attire through the decades is always welcome.

“You can wear a prom dress or go retro or roll with the Hollywood theme, and if you don’t, just get here and have fun,” said Jon Horvath, a member of the prom committee.

Befitting the “adult” nature of the 21-and -over event, this year features even more alcohol options. In addition to two cash bars serving beer, wine and “prom punch,” there will be bourbon tasting flights.

Adult prom is the annual fundraiser of the Yellow Springs Browns Backers with all proceeds going to support Yellow Springs Kids Playhouse. Advance tickets are $15 and can be purchased at IONA Boutique, Yellow Springs Brewery, Village BP, Dino’s Cappuccinos and Harvest Moon Bakery in Xenia. Tickets are $20 at the door — if the event doesn’t sell out beforehand.

Organizers have reason to believe adult prom might sell out again. Highlights last year were a dance floor packed with villagers of all ages, social media abuzz for weeks with prom photos and the rare opportunity that local adults had to mix and let loose together.

“All our circles overlap, but not completely — except for an event like this,” Horvath said. “The cliques in high school got together at prom just like the cliques in Yellow Springs get together at adult prom.”

This year prom classics will be pumped through an upgraded sound system and spun by M.C. Clean (Jason McClean). Music includes everything from Dean Martin to Daft Punk, Guns N’ Roses to Macklemore, according to organizers. Expect some Journey and Alphaville power ballads for slow dances. Favorite ‘80s jams from last year — Def Leppard’s “Pour Some Sugar On Me,” Prince’s “Purple Rain,” and Men Without Hat’s “Safety Dance,” are sure to reprise. And there will be DJ requests by donation.

Some characters likely to make an appearance this year are Sonny and Cher and Luci and Desi. But matching couples attire is not a requirement. Horvath is leaning towards Mork from the 1970s sitcom “Mork & Mindy” while his wife, Karla, is going glamorous, and Mork is decidedly non-glamourous, he said.

Fitting with the Hollywood theme, there will be a red carpet to strut down and a VIP rope entrance to arrive in style. Lots of gold and silver will be used to decorate the gym in what Chris Hutson calls “Hollywood gaudy.”

Last year the Browns Backers — a club of more than 40 villagers who follow the Cleveland Browns — raised more than $2,000 for YSKP. It’s a cause close to the heart of Browns Backers, many of whom have children who participate in the local youth theater company.
“It’s a creative outlet for children that doesn’t exist in other communities — it’s so uniquely Yellow Springs,” said Horvath, also a Browns Backer, whose two children take acting and hip hop classes from YSKP.