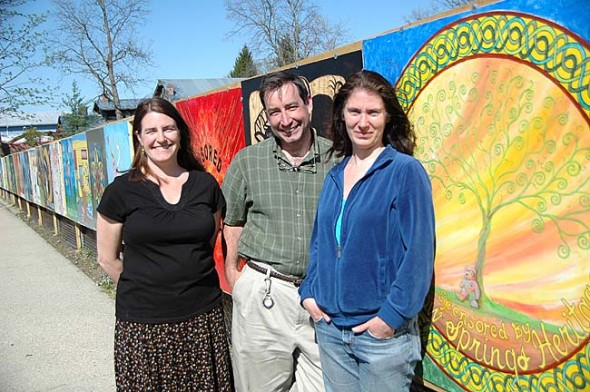 Holly Underwood of the Yellow Springs Arts Council, who organized the Fence Gallery at the Barr property, is shown with two participating artists, Scott Stolsenberg and Bettina Solas. The project, which was the brain child of property owner Jim Hammond, will be up until the fall. (photos by Lauren Heaton)

Fence gets a coat of many colors

The response to the downtown “fence gallery” has been so positive that organizers are trying to figure out how local artists can do a similar project every year.

“It’s public art,” said Holly Underwood of the Yellow Springs Arts Council recently. “It’s cool and popular. I can’t tell you how many artists told me, when they dropped off their painting, how much they enjoyed it.”

In its inaugural year, the fence gallery, located on Xenia Avenue in front of the former Barr property, fills a specific and time-limited need: how to perk up the construction site of the new Mills Park Hotel. Excavation will begin soon on the project, which is slated for completion in mid 2015, according to property owner Jim Hammond.

“It’s not going to be that pretty for a while,” Hammond said in a recent interview. So he came up with the idea of using original art to add visual appeal.

Ultimately, the site will be the home of the Mills Park Hotel, a 28-room hotel complete with a restaurant, banquet hall, a gift shop and 81 parking spaces. A locally known historic preservationist, Hammond plans to model the hotel after the historic home of William Mills, one of Yellow Springs’ founding fathers.

But for the fence, he aimed for something a bit more contemporary. Inspired by the safety fences around construction sites in cities, Hammond wondered if the fence itself could turn into an artist’s canvas. He took his idea to Roger Reynolds, who steered Hammond toward the Arts Council, which has embraced the project with gusto. Hammond kicked around the idea with Arts Council members Jo Caputo and Nancy Mellon, and Caputo wrote a grant to the Yellow Springs Community Foundation, which granted $1,000 for the project.

And so, beginning this winter, the fence gallery took shape. Hammond wanted the project to raise money for the Arts Council, so local businesses and nonprofits were asked to sponsor a 4×4 fence panel for $100. About $80 of that amount provides payment for the artists, who had applied to participate in the project. About 55 artists applied and none were turned away, according to Underwood, the main organizer.

Artists were asked to include on the panel the name of the sponsoring business, and to make the artwork family-friendly.

“That was it,” Underwood said. “The idea was to go nuts, to have fun.”

After artists applied to take part, Mellon matched some artists with businesses based on their style and subject matter, but many of the artists were randomly assigned to their sponsors, Underwood said.

The result is an explosion of styles, colors and content, stretching from the Oten Gallery south to Limestone Street. A soulful representational portrait of a cellist by Käthi Seidl, for Chamber Music Yellow Springs, rubs shoulders with a cartoon by Dr. Flanagan, for Ha Ha Pizza. A whimsical blue kangeroo hopping into Village Artisans, designed by Kathy Moulton, shares space with a hand-carved model of the Mills Park Hotel by woodworker Paul DeLaVergne, for DeLaVergne Woodworks. A watery blue abstract sponsored by Xylem, by Jade McConnell, mingles with playful books hanging from a tree for the Yellow Springs Library, by David Baxter.

For Scott Stolsenberg, creating a panel for the nonprofit Yellow Springs Heritage helped to push him in new directions, combining his love of Celtic knots with an image of a fantastical green tree, underneath which lolls a teddy bear with a peace sign on its chest.

Bettina Solas, who is married to Stolsenberg, also went in a new direction in her panel, which is sponsored by the shoestore Sweet Sanaa. Solas went to the Dayton Street store, where she noticed the main colors of red, white and black, then created an abstract for the business featuring those colors.

The sponsors, the Arts Council and Hammond all seem pleased with the artistic results of the fence gallery, according to Underwood.

“Several artists told me they’d happily do another,” she said.

Photos of all the panels will be added soon to the Arts Council website at ysartscouncil.org, according to Underwood. Or folks can stroll downtown and check out the fence gallery in person. It will remain up through the fall.