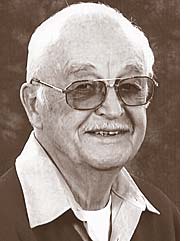 John Leo Wells, of Cedarville and Corpus Christi, Texas, died on Wednesday, May 14. He was 91.

John was a veteran of the Merchant Marine Corps (1944–45), serving on the SS Robert S Bean, SS Wolverine and SS George Davis in the South Pacific, North Atlantic and Mediterranean. He served as lieutenant (junior grade), second mate (navigator). He was a graduate of the University of Missouri. In 1950, he married Eileen Kyle. He taught “veterans on the farm” in Adams County while getting started in farming near Cedarville. In 1960, he began working for Miami Deposit Bank. He retired from there in 1990 as vice president and Cedarville Branch manager. He served on the Cedar Cliff Board of Education (1960-1971), was a member of the Lions Club, and the Masonic Lodge. While living in Cedarville, he was a faithful member of the Cedarville United Presbyterian Church, serving as chairman of the congregation, trustee and elder. He was a faithful member of Island Presbyterian Church in Corpus Christi. Declining health brought him back to Cedarville to live with his daughter, Victoria, in June of 2013.

John was preceded in death by his parents, Lester and Ethel Wells; three brothers, Glen, Harold, and Dean Wells; and one sister, Helen Duncanson, all of Missouri. He is survived by his wife, Elizabeth “Betty,” of Corpus Christi; three daughters, Charlene (Kent) Campbell of Cedarville, Julia (fiancé Roman Kwiatkowski) Najjar of Medina and Victoria (Gene) Hitchcock of Cedarville; the mother of his children, Eileen Wells-Rice of Venice, Fla.; six grandchildren, Gail (DeWayne) Sowell, Rebecca (Jason) Ryan, Kyle Hitchcock, Thomas (Amber) Hitchcock, Sarah Najjar, Rachel Najjar; and six great-granddaughters. The funeral service was held Monday, May 19, at the Cedarville United Presbyterian Church, officiated by Rev. DeWayne Sowell with arrangements being handled by Littleton & Rue Funeral Home, Springfield. Burial was at North Cemetery in Cedarville. In lieu of flowers, memorial contributions may be made to Hospice of Dayton. Condolences may be expressed to the family at http://www.littletonandrue.com.