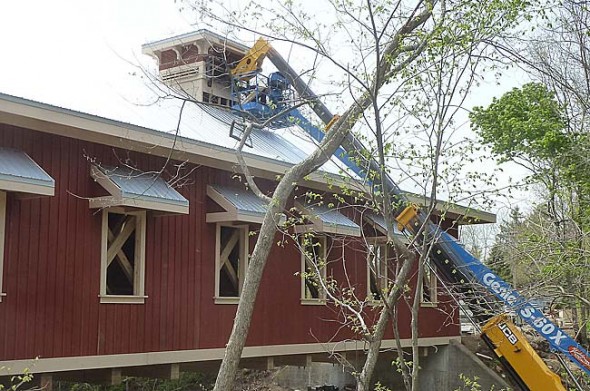 The late Dick Eastman, longtime villager and Greene County engineer, will be honored this Friday at the dedication of the Richard P. Eastman Hyde Road Covered Bridge. The event takes place at 10 a.m. Friday at the Corry Street end of the bridge. (Submitted Photo)

It was no secret that the late Richard Eastman loved covered bridges.

During his five-term tenure as Greene County Engineer, the long-time Yellow Springs resident worked to save the county’s existent covered bridges. In fact, Eastman, who died in 2011 at the age of 91, was responsible — with the agreement of Antioch College — for the placement in Glen Helen of the bridge visible from Grinnell Road, after it could not be maintained in its original location.

Now, Eastman is to have the county’s newest covered bridge named in his honor. A ribbon cutting ceremony and dedication at 10 a.m. Friday, May 9, will open the newly constructed Richard P. Eastman Hyde Road Covered Bridge, which crosses a segment of the Little Miami Bike Trail.

Coinciding with the bridge dedication, the Village of Yellow Springs has proclaimed May 9, 2014, to be Richard Eastman Day. The proclamation recognizes multiple aspects of Eastman’s contributions to the village, noting “a life of integrity and service to family and community.”

The red-painted structure, complete with cupola and a bicycle weather vane, is a 77-foot span Howe Truss, which was a popular design in the mid- to late-1800s, according to current Greene County Engineer Robert N. Geyer.

Geyer, who worked with Eastman in the 1970s before joining the private sector for a time, said he’d been thinking for the past couple of years about a way to honor Eastman’s public service, which as county engineer spanned 1974 through 1996. “A lot of the guys still working out there were hired by Dick,” he said.

The Hyde Road bridge seemed “a fitting tribute,” in good part because of Eastman’s affection for covered bridges, Geyer said.

The bridge’s placement also has personal significance. It is just north of “The Vale,” the intentional community where Eastman and his wife, Wilberta “Billie,” raised their four children, John, Rachel, David and Roy. Billie still lives there, and Roy and his family have a home there as well.

What’s more, Eastman was instrumental in the design and funding of the bikeway that the bridge crosses.

“Dick was godfather of the Little Miami Scenic Trail,” said Charles “Ed” Dressler, former director of the Greene County Park District and an early proponent of the “Rails to Trails” movement of turning abandoned railway tracks into recreational trails. “He was the only county engineer in the state of Ohio who wanted to do a project like this, Dressler recalled. “Back in 1987–88 the question was ‘why?’ Now the statement is, ‘when?’”

Although the bike path project was controversial in Yellow Springs at the time, now “it’s taken for granted,” said John Eastman, a Miami Township trustee, who like his father is also an engineer. “Dad made the argument that bicycles were a form of transportation.”

County Engineer Geyer said he thinks that the bike trail is probably the biggest legacy of Eastman’s years as engineer.

“Without him it would never have happened,” Dressler said. “My favorite quote by him (for supporting the bike trail) was ‘because it was the right thing to do.’”

The Eastman family is thrilled about the bridge’s dedication to Richard. “In every aspect this bridge fits Dad,” said John. “All the pieces fit together so neatly.”

According to the engineer’s office, the project was designed by Smolen Construction of Ashtabula, Ohio, and built by R.G. Zachrich Construction of Defiance. The total cost of $480,000 was funded by the Ohio Public Works Commission and the County Bridge Levy.

Geyer said the bridge is designed to carry up to 80,000 pounds, allowing all legal loads — from school buses to horse trailers to cement trucks — to pass through. What’s more, “it should last 100 years,” Geyer said.

The engineer’s officer asks that anyone attending Friday morning’s ribbon cutting and dedication access the site from Corry Street or U.S. 68.