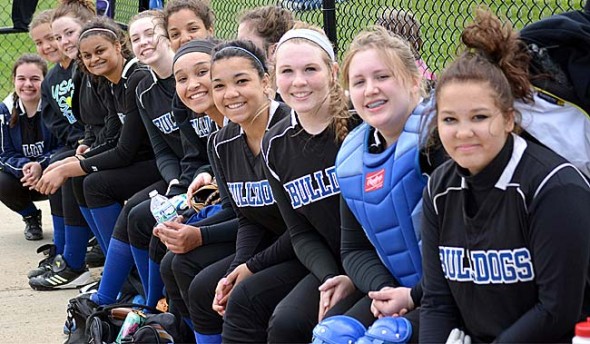 While the YSHS girls softball season ended on May 13 after a tournament loss to Southeastern, the season was a success, with a 16-strong roster of girls who won four games and averaged an impressive 13 runs per game. The team was all smiles on the bench on May 3, when they won back-to-back games during a double-header at Belmont. From right are Evelyn Greene, Danny Horton, Jesi Worsham, Ashley Longshaw, Sierra Lawrence, Nekyla Hawkins, Chelsea Horton, Shanice Wright, Maddie Gueth, Victoria Willis and Amelia Gray. (Submitted photo by Coach Jimmy DeLong)

When Amelia Gray fouled off a pitch in the last inning of the season, her team down 26–0 to the Division IV sectional top-seed team, Yellow Springs High School softball Coach Jimmy DeLong watched all 15 teammates standing at the dugout fence turn and lift their heads in unison to track the ball, then yell out to psyche the freshman up for the next pitch.

The final moment of the fast-pitch softball team’s last game was emblematic of a season during which the Lady Bulldogs never stopped supporting each other and never gave up, according to DeLong.

“Whether you win or lose, it’s all about effort and being a team,” DeLong said, adding of Gray’s final at-bat: “That was a good character test.”

But this year’s team had more than just a great attitude — they also got a taste of success, finishing with four wins and averaging 13 runs per game.

It’s been a long time coming for a program that two years ago was happy just to field a team after a four-year hiatus, going 0–10 with 10 players during a rebuilding year in 2012. Last year the squad improved to 2–8 but still had to scrounge for players. This year, with a solid roster of 16, they finished 4–7. Next year, DeLong thinks YSHS, finally eligible again for league play, could challenge for the Metro Buckeye Conference title.

“We did compete this year and next year, with the talent level of the girls coming back, I have the expectation we will be right there with [the league’s best],” DeLong said. Yellow Springs officially rejoined the Metro Buckeye Conference by a conference vote on Saturday.

Starting pitcher Sierra Lawrence led her team with an impressive senior season behind the mound and the plate. Lawrence led all MBC players in three categories, with 31 runs scored, four home runs and 40 RBIs, and was second in the league with 57 strikeouts in 45 innings.

Lawrence followed in the footsteps of her mother, Celia Prether, who played softball at YSHS in the 1980s and now assists DeLong. The transfer from Springfield Catholic Central, in her second year for the Lady Bulldogs, went from being “barely able to hit the ball” in her words, to batting a .676 average and knocking in three grand slams during the doubleheader at Belmont.

Lawrence’s 40 RBIs were a telling stat, especially when the player with the second-highest RBIs in the MBC only hit 14, DeLong said.

Last year, DeLong recognized Lawrence as his best athlete and began grooming her for the critical pitching position — a job that Lawrence took seriously over the off-season with weekly private pitching lessons. Next year, Lawrence hopes to walk on the team at Wilmington College. And she couldn’t have done it without DeLong, “the team’s rock,” she said.

“I wouldn’t be a pitcher if it weren’t for him,” Lawrence said.

According to DeLong, the Belmont doubleheader was the highlight of the season, with a team cookout capped on either end by 17–13 and 30–19 wins. DeLong said he has tried to keep the sport fun so that they can keep a healthy roster and to help deal with tough losses, but that “this team was always upbeat and ready to play — they always kept their head up,” he said.

Strong players returning next year for the Lady Bulldogs are juniors Jesi Worsham and Chelsea Horton. Worsham, the team’s other pitcher, led the MBC with 27 stolen bases and was third with 24 runs scored to go along with a .419 batting average. Horton was fifth in the MBC with a .464 average and also fifth in stolen bases with 13.

Also excelling this year for YSHS was senior Rachele Orme, who finished fourth in the league with a .478 batting average.

DeLong, who lives in Enon and was the coach of Greenon before coming to Yellow Springs in 2012, said it’s not only about winning.

“I pride myself on keeping my composure and keeping it enjoyable,” DeLong said. “I try to mold these girls and make them feel good about themselves. And if they can get some wins, it’s even better.”

Other assistant coaches this year were Shannon Cox and Bubba Worsham.