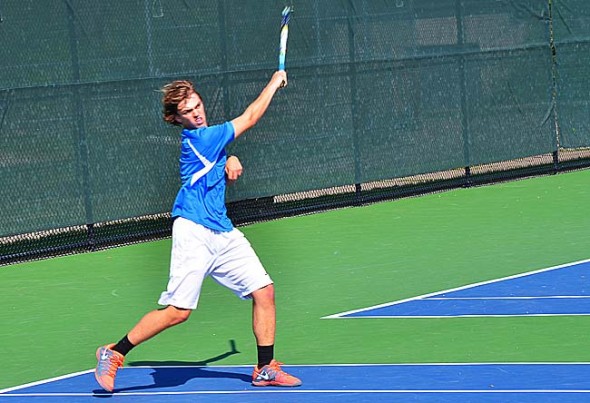 It was during his second of three victorious matches at sectionals last week that Yellow Springs High School freshman Augie Knemeyer was truly tested. Playing in those back-to-back-to-back contests in 85-degree heat, the unseeded Knemeyer won a grueling tiebreaker to take the first set, when his ranked opponent called for a rare medical timeout that broke Knemeyer’s momentum.

“It was hot, I’ll give him that,” Knemeyer said of the move, which was technically legal, but in poor sportsmanship. After dropping the next set 4–6, Knemeyer vowed to not let his opponent’s stunt get the better of him.

“It really added fuel to the fire,” Knemeyer said. “I got determined, and thought, ‘I’m not going to let this be the reason I lose.’”

In the third and final set Knemeyer creamed his opponent 6–1, and went on to cruise to a 6–1, 6–0 victory just 30 minutes later in his third match of the day.

Knemeyer finished in the top four of 42 singles players from 14 schools to secure his place at districts. He plays a No. 1 seed in the 16-player Division II Southwest District Championships at the ATP Tennis Center in Mason on Thursday, May 22.

For the 15-year-old freshman, playing in a major tournament on the same courts that Rafael Nadal and Serena Williams compete on each year is reward enough.

“I just want to have fun and take in the moment that it is which is probably one of the biggest stages I have been on,” Knemeyer said. As for the next three years, Knemeyer has confidence in his play, but doesn’t want to set external goals.

“I feel like if I just play the way I feel I am capable of playing, I’ll be happy with how the rest goes. If I improve my play, the wins will come,” Knemeyer said.

During the regular season, Knemeyer went 10–3 (8–3 at first singles) and inspired his teammates by example, arriving early for every practice and match and modeling superb sportsmanship, according to Coach Donna Silvert.

“He brought a spark to Yellow Springs tennis that we haven’t had for a while,” Silvert said, adding that Knemeyer is always quick to congratulate his opponent on a good shot.

On the court, Knemeyer excels in hustle, competitiveness, athleticism and footwork, some of which no doubt comes from his soccer training (he also plays on the soccer team). He also is tenacious with a big serve, according to his father, Michael. His game plan is to go after every ball and attack the net to put his opponent away, Augie Knemeyer said.

“I can run down balls they think are winners, and that wears them down, then I break their heart at the net,” Knemeyer said.

Coach Silvert’s calming presence during game breaks has also helped Knemeyer this season, according to Knemeyer’s father, as has staying positive while playing a highly psychological sport.

“Just keep an open mind and if your original plan doesn’t go well, you have to be able to adapt,” the younger Knemeyer said of his tennis philosophy. “Just always believe in yourself. If you get yourself down, they’ll take advantage of that.”

Silvert is excited by the future of Yellow Springs tennis with Knemeyer on the squad, saying that “good tennis breeds good tennis.” The co-ed team went 2–12, with wins over Fairborn and Spring Valley Academy, but could be on its way to a winning season with the talent now in development, according to Silvert.

“There’s enough of a spark of interest now that a number of the student players will keep working on their game over the summer,” Silvert said. “Once they start to get the skills and are hungry for it, I think we’ll have more and more success.”

Silvert is also hopeful that a collaboration with the new Antioch Wellness Center will grow more players for the squad, as there are initial plans for a tennis pro at the center to teach community tennis lessons for youth and adults.

Silvert has structured the YSHS team so that no one is cut. Instead, players are split between varsity, reserve and club squads depending upon their skill level. “I don’t want anyone to be afraid to come out because this is a lifetime sport,” Silvert explained. But that has taken a lot of community support, Silvert added. This year mentoring has come from Stacey Knemeyer, Bob Huston, Tijoe Kwan, Hans Jacobson and Josh Mabra. “Intergenerational mentoring is Yellow Springs at its finest,” Silvert said.

According to Silvert, other YSHS standouts this season were senior four-year captain Nick Miller-Jacobson, who was always ready to hold down whatever position was needed by the team; Gabe Day, who will smile even after 90 minutes of competitive play and who is recovering from a broken wrist; Henry Potts-Rubin, who is fast with “super team-driven attitude;” Meredith Rowe, with incredible court sense; Kasey Linkhart, who is a new tennis player but with amazing skill, and Dylan Dietrich, a freshman who impressed with a win on the third-singles court. Other players contributing to the team were Dakota Wright, Reed Huston, Duard Headly and Annabel Welsh.