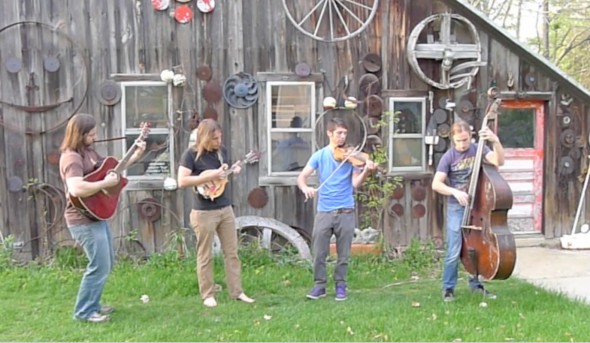 Local string band Blue Moon Soup practiced some originals on North Stafford Street on a recent evening. The band headlines a benefit for WYSO at the Clifton Opera House 7 p.m. Friday, May 16.

Local four-piece string band Blue Moon Soup, which drops references to the Lord of the Rings and spawns wild hippie dancing all while pleasing dire-hard bluegrass fans with its fiddle-driven improvisations, is on the rise.

>With music that sounds as good around a campfire as in a bar, Blue Moon Soup blends chucking mandolin, floating fiddle, lush guitar and plucked upright bass with a splash of rich three- and four-part vocal harmonies to taste, seasoned with a pinch of Medieval chord progressions. Simmered for four years, it makes Blue Moon Soup.

A group of mostly 20-somethings who are gaining some popularity on the festival circuit are bringing their act home next week for a concert benefiting local public radio station 91.3-FM WYSO.

The band was formed in 2010 by YSHS graduates Robbie Marion, now 21, who plays the fiddle and Brendan Moore, a 22-year-old mandolinist. The group also includes upright bassist Jon Bauman, 21, of Xenia, and guitarist Justin Moon, 33, who lives in a rural area between Yellow Springs and Springfield.

Blue Moon Soup has been blowing up in recent years, since the release of its second album, self-titled, last September, which features nine tracks showcasing the best of the band’s abilities and packaged with unique original and reproduced medieval art. From bluegrass standards to Celtic ballads, an instrumental track featuring a Chinese pentatonic scale to a song with a Latin beat and claves, it is at once sprawling and focused by its fantasy elements.

Read the full story in the May 8 issue of the News and visit http://www.bluemoonsoupmusic.com for music.