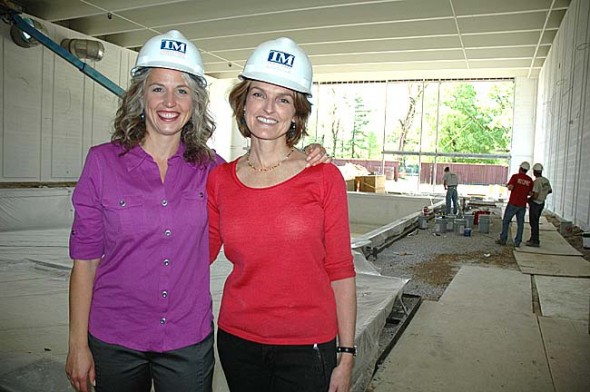 Monica Hasek, left, the new director of the Antioch College Wellness Center, and project lead Dorothy Roosevelt stand near the facility's almost-completed new pool. The center is expected to open in late summer or early fall.

Recently, Antioch College officials announced that Yoga Springs owner/director Monica Hasek has been named the new director of the school’s new Wellness Center. The center, an upgrade of the former college gym, will have cost around $8 million when it opens to the public late this summer or early fall.

Hasek, a professional interior decorator and realtor as well as yoga teacher, will replace Becky Harrison, who was hired in February but left the job two weeks ago. According to Dorothy Roosevelt, the Wellness Center project lead, college leaders sought someone local to replace Harrison so as to move forward as quickly as possible. Hasek, who had met several times with Roosevelt to discuss visions for the new center, seemed the perfect choice for the job, according to Roosevelt..

“When I got the phone call, I couldn’t resist,” Hasek said recently regarding the opportunity to “expand what I was already doing and create a broader wellness community.”

The facility has been designed to meet the needs of the community as well as the college, and leaders hope that membership costs will be comparable to area fitness centers, Hasek said. All aspects of the old gym have been upgraded, with new windows, lighting and flooring throughout, a new floor plan, and an expanded pool in a natatorium with a south-facing wall of glass.

See the May 15 News for longer article on the Wellness Center and its new director.