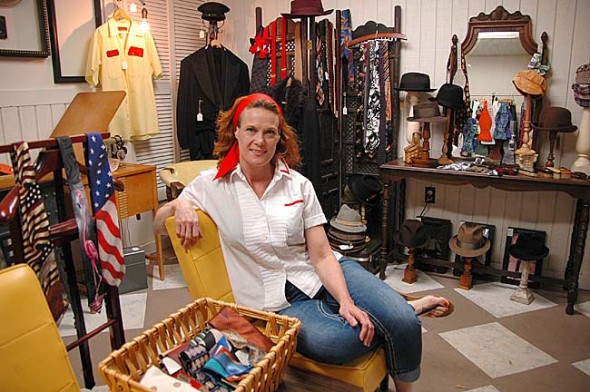 Where else in town can you buy a handmade fedora, a set of fairy wings, a 1920s men’s tie, a women’s disco-era vintage blouse and a puffy ’80s jean jacket?

At the eclectic Dirty Fabulous vintage resale shop, 134 Dayton St., owner Brenda Kennedy hopes to offer the village something unique with a collection of secondhand and new items that have one thing in common — they’re fabulous.

“I hope I’m a good complement to the town and everything that it stands for,” Kennedy said this week. “I thought it would be a good fit for the eclectic taste around here.”

Dirty Fabulous has been open for three weeks but hosts its grand opening this weekend, Friday—Sunday, June 13–15.

As the “dirty” part of the name implies, much of the shop is resale vintage wear for both men and women, from 1950s housewife dresses, bonnets and purses to “horrible ’80s fashions.” There’s a three-piece men’s suit from the 1930s and plenty of loud, patterned ladies dresses from the ’60s and ’70s. Every decade is in right now, Kennedy said.

“There are things that someone else has loved and they are still fabulous — they have so much character,” Kennedy said. Everything is cleaned, steamed and pressed and looks almost new, she emphasized.

Kennedy also sells some of her own creations, including handmade flower headbands and accessories, baby headbands and “piglits” — decorative footwear for infants — upcycled tiki torches crafted from old wine bottles and even a lamp made from an old gas pump. Friends and colleagues have made other items, like jewelry crafted from antique coins and handmade men’s hats and bowties by Christopher Crewe, who also works at the shop. There are antiques like old typewriters and sewing machines, plus an old shoe shine, a men’s valet, a ’70s hot plate set and a Japanese fly fishing rod and also new men’s socks and quirky entertaining products.

The store is an exciting new venture for Kennedy, who teaches operative dentistry full-time at Ohio State University during the week, she said. But it was also somewhat of a surprise. After Kennedy moved to Yellow Springs from Springfield earlier this year, she went in search of a workspace to assemble accessories she sold predominantly online. Local property owner Bob Baldwin showed her the Dayton Street space, which was recently vacated by Artistic Silver, and Kennedy fell in love with the storefront’s ambience.

“I was planning on opening a shop a few years down the road but when I walked in here I said, ‘Yes, I have to do it,’” Kennedy said. “It’s a lot of work but it’s so fun,” she added.

Kennedy had long been storing many beloved items she acquired at estate sales, auctions, flea markets and garage sales and quickly found more to fill the store. In addition, she has several local people scouting for rare vintage finds. Friends and family chipped in to help her paint and decorate the store. Kennedy also buys vintage clothing after hours by appointment.

Kennedy, who grew up in southeastern Ohio, spent many years visiting Yellow Springs from Springfield while her children were young, and recently decided to move to the village with her 17-year-old son, Halen. Kennedy said she appreciates the “unique clothes people wear and the personalities” of Yellow Springs, and aims to please a local customer base.

“Hopefully I will have things that local people might want and enjoy — my goal wasn’t to focus on tourists even though I know that is where the money is,” Kennedy said.

Kennedy is planning on a 10 percent discount for locals, while those in the military will receive a 20 percent discount. Eventually, Kennedy hopes to add a tea room for children’s tea parties, complete with fancy gloves and hats.

For more information, email Kennedy at decobabe.kennedy@gmail.com or call the shop at 937-631-1369.