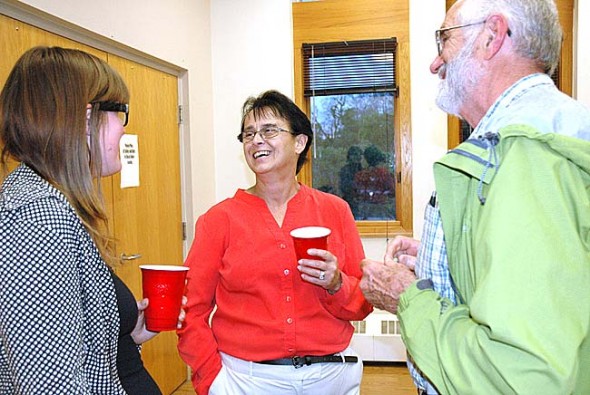 Patti Bates, center, has been chosen as the new Yellow Springs Village manager, beginning on July 7. She is shown here during the reception following the May 22 candidate forum, with Rose Pelzl and Harvey Paige. (Photo by Diane Chiddister)

Patti Bates is excited to have been hired as the new Yellow Springs Village manager.

“I’m really looking forward to coming to Yellow Springs, digging in and seeing what I can do to help out,” she said in an interview on Tuesday.

Village Council announced that Bates won the job at its June 2 regular meeting. She “rose to the top” of the two-day intensive interview process May 22 and 23, when she and finalists Dave Elmer and Bob Kellogg met with Village staff, local business and educational leaders and a diverse group of villagers in both small and large group formats, according to Council President Karen Wintrow.

“Her energy and excitement grew over the two days,” Wintrow said, stating that Bates brought “an honesty and straightforwardness about her” that appealed to many. Bates was the first choice of Village staff, Village Council and the villagers who met with the finalists during the two days.

It’s not often that villagers are of like mind, according to Council member Gerry Simms, who stated that, “This is the first time that a high percentage of local people agreed on the same person.” He encouraged villagers to maintain their enthusiasm after Bates comes on the job.

According to the contract approved by Council, Bates will begin her new position on July 7, and make an annual salary of $99,000. The contract includes an agreement to stay on the job for at least three years, to work a minimum of 80 hours bi-weekly and to move to the village within six months. If Bates and her family aren’t able to find a home in that time, she could have an additional three months, according to the contract.

Bates replaces Laura Curliss, who left the job after a little more than a year in the position. Curliss resigned after reaching a settlement with Council in August of last year. She was replaced by Interim Village Manager Kent Bristol, who said after Bates comes on the job he will spend several half-days a week to help acquaint her with the job, gradually diminishing the time together.
Bates is currently Village administrator of Williamsburg, Ohio, a town somewhat smaller than Yellow Springs, a position she has held since 2006. Before that she was director of administration at the Kenton County Detention Center in Covington, Kentucky. She has a masters in public administration from Northern Kentucky University.

Bates sought the Yellow Springs job because, “I was looking for a new challenge,” she said on Tuesday. The Village faces some challenges that she’s experienced before, such as replacing or upgrading the water treatment plant, but some will be new, including how to pursue economic development when limited land is available in the village.

“I’ll be digging into that,” she said.

Bates and her husband, Mike, will start looking soon for a home in Yellow Springs for the couple and their pets.

“All of my children have four legs,” she said, stating that her husband is a cat lover and the couple currently have seven cats, although in the past they’ve had more. Mike works as a mortgage loan closer at the Cincinnati branch of the Fifth Third Bank, and the two have extended family in the Cincinnati/Milford/Goshen area.

Bates stated that she did enjoy the two-day interview process and was impressed with the level of citizen involvement. At the June 2 meeting, Wintrow thanked those who took part in the process, which was organized by Council members Brian Housh and Gerry Simms. Participants included consultant Doug Plunkett of Management Partners, the eight-member citizen committee that helped with candidate vetting and interviews, and more than 40 villagers who met with the candidates in both small and large groups.

“It was an excellent process,” Wintrow said.

Other items from Council’s June 2 agenda, including a discussion of the next steps for the CBE, will be in next week’s Yellow Springs News.