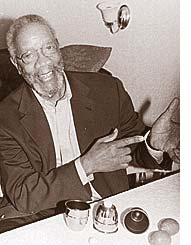 William Edward Alexander Sr., long-time resident of Yellow Springs, died in Louisville, Ky., following a battle against cancer, on May 12. Bill was president of the James A. McKee Association for many years. Bill attended the Louisville public schools and graduated from Central State University in Wilberforce, Ohio, in 1956, where he was dean of pledges for Alpha Phi Alpha Fraternity. In 1961, Bill married Mary J. Adams, of Xenia, and together they raised four children in Yellow Springs. His wife, Mary Alexander, served on Yellow Springs Village Council for a brief period.

Bill began magic as a hobby during his years at Madison Junior High School in Louisville. By the time he reached the 11th grade, his magic performances had become semi-professional. At age 19, he performed privately for Louisville’s internationally-famous professional magician Don Redmon, who sponsored Bill’s membership into The International Brotherhood of Magicians.

Bill retired from Wright-Patterson in 1989. When he retired, he was averaging over 100 magic shows per year. Two memorable shows occurred at the Yellow Springs High School benefiting the James A. McKee Scholarship fund. He was a life member of the International Brotherhood of Magicians and Alpha Phi Alpha Fraternity. His interment was at the Kentucky Veterans Cemetery, Fort Knox, Ky., on May 19.