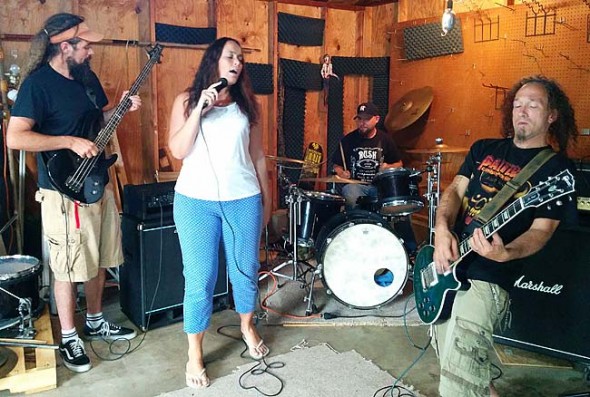 The free one-day music festival on the Fourth of July weekend will showcase the wildly eclectic village music scene and some of its homegrown musicians.

With the exception of Atlanta blues singer Gillia, all acts are from Yellow Springs or have deep local roots, according to festival organizer Dorian Benning. Benning said he had a difficult time narrowing down the ticket because there are so many local bands with such distinctive sounds.

“I got flooded with calls from some 30 artists who wanted to participate so I narrowed it down to those I had seen play,” Benning said. “Yellow Springs has a lot of music talent.”

Benning, a trucking company supervisor, organized the festival “just for fun” and says if he breaks even financially while sharing good music “that’s cool enough for me — I can live with that.”

Since the event is free, people can stop by and stay for as long as they want, Benning said. The festival is also a way to raise awareness about in-school bullying, with a short 10-minute talk about the issue planned.

Previously, Benning helped organize a few of the Village Fam Summer Jam festivals at the Antioch Amphitheater the last three years and put on a smaller Summer Music Bash in Kings Yard last year. With a new venue in the Bryan Center lawn and plenty more vendors and artists, Benning said he believes the festival is primed to grow.

In arranging this year’s lineup, Benning hoped to highlight the impressive mix of musical styles and experiences in the Yellow Springs music community — from the young newcomers in hip-hop collective Village Fam to the established blues band Bluzion led by former local police officer Gerry Green. An additional twist is the inclusion of familiar local street musicians Joseph, the djembe drummer who parks on the corner bench at Xenia and Corry Streets, and saxophonist Thomas Allison, who are both slotted before the official 11 a.m. start.

Dynamic local rock band Spanish Tony Sanchez features the brother-sister duo of Adam Gueth on bass and Amy Dihrkop on vocals. Gueth, a local postman, and Dihrkhop, whose powerful pipes dominate the band’s sound, formed the bluesy rock group in 2010. With the more recent addition of Jerry Clements on drums and Bill Sykes on lead guitar the band now boasts a heavier sound. Sykes himself has had a hand in many local music projects.

A group of Yellow Springs High School graduates formed Village Fam in 2012 and soon after produced their first music video “All I Know Is The Village.” According to Benning, whose son, Brad Benning-Clark (alias V3) is a rapper in the group, Village Fam has now written more than 100 songs. Other locals “representing” in the group are artist and producer Issa Walker, Anthony Carter (Ant Greedy) and Aaron Willis (Ace Toogs), while band member Marcus Lamont (Merq) hails from Mansfield, Ohio.

Benning said Village Fam is “not your typical group of rappers” since its members are “really into their education.” All are college students or recent college graduates. Their music explores themes of their early 20s lives — partying and having fun — but is certainly not “the hard type of rap where they are down on the police and degrade women,” Benning said.

ErratiC, of Kettering, is a buff at beatboxing, a “lost art” in the words of Benning. The Nerak Roth Patterson Band, a staple at the annual AACW Bluesfest, features the blues guitar talents of Patterson, who has opened for blues legend B.B. King, according to Benning. Lauren Nicole is a Cedarville-based contemporary R&B singer who will reunite with former bandmate Vanessa Honore of the girl group LV. Jonny Dreads & The Mystiks is a familiar local reggae act featuring local lead singer “Jonny Dreadlocks.”

Benning, who grew up in Yellow Springs in the 1970s, is excited to show how the local music scene is both highly diverse and collaborative. While Yellow Springs has always been a center for music due to its artistic bent, today “there are bands all over the place,” Benning said.

“Music always been here but there’s more of it now,” Benning said.

Besides bringing good music to the masses, Benning looks forward to raising awareness about the issue of bullying. Last year’s concert was themed around “Stop the Violence.”

“I didn’t bully anyone [in high school] and neither did I witness that but as I have gotten older, I have noticed kids swinging in that direction,” Benning said, adding that the U.S. has become a more violent, gun-centric culture.

“Sometimes kids can just be really mean and cruel,” he added.