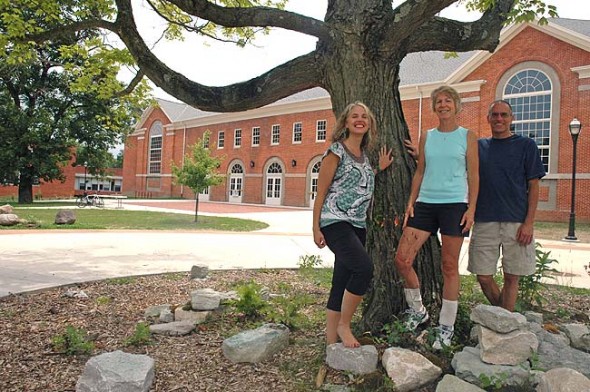 Last week, Antioch launched $1 million community fundraising campaign to cover some of the $7.8 million cost of renovating its 44,000-square-foot Wellness Center. Already $700,000 of the total has been raised, including $500,000 from an anonymous donor and the rest from members of a fundraising committee.

While Antioch hopes villagers join as members to pay for the facility’s ongoing operation, an additional financial contribution will help the college defray its upfront capital costs, which Antioch is financing by taking out a loan against its endowment, committee members said.

“The community needs to say we appreciate the fact that the college has put in $7.8 million, and we as the community can put in $1 million —that is a powerful statement,” said committee member and Antioch alum Malte von Matthiessen.

Built in 1929, the facility, formerly known as the Curl Gymnasium, was last renovated in 1964.

Villagers can donate online at wellnesscenter.antiochcollege.org or by calling von Matthiessen at 937-657-3676, emailing him at mvmysi@gmail.com or contacting Antioch Wellness Center director Monica Hasek at 937-319-6139.

Since Antioch has yet to purchase much of the facility’s equipment, donations received by the end of the year will be spent on everything from a lifeguard chair to yoga balls to reduce the amount the college has to finance. Other needs at the facility include treadmills, recumbent bikes, elliptical machines, dumbbells, tennis court resurfacing, swimming pool lane lines, handicap lifts and more, and donations can be earmarked for specific purchases.

A grand opening celebration of the wellness center is set for Sept. 6, with regular hours beginning on Sept. 8. Memberships go on sale in mid August.

Donors who give at least $1,000 will receive an individual premium membership for one year, which includes unlimited fitness classes and is valued at $645, as well as their name on a brick on the patio in front of the facility. Those donating at least $2,500 will also get their name on a plaque inside the wellness center, while higher amounts come with naming opportunities. A gift of $25,000 gets a donor’s name on a racquetball or tennis court. Other naming opportunities are $35,000 for the visiting physician’s office, $75,000 for the rain garden, $1 million for the pool and $2.5 million for the entire facility.

As Hasek sees it, because the wellness center is a community asset that will benefit villagers, it makes sense that the college would ask for them to chip in for the center’s capital costs. The center is projected to operate at a deficit for several years with the expectation that about 800 people (including Antioch students, faculty, staff) will join the facility in its first year, Hasek said.

Read the full story on the wellness center in the July 10 issue of the News.