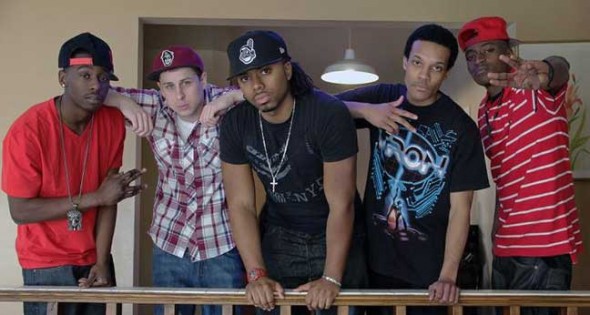 Hip-hop in the street this week

Village Fam may be Yellow Springs’ first hip-hop group, but they hope not to be its last.
The group of born-and-raised villagers, now in their 20s, didn’t have access to local hip-hop shows when they grew up. As the big kids on the block they’re on a mission to spread beats and rhymes here through an annual music festival that highlights up-and-coming hip-hop artists while showcasing established local and regional talent across genres.

The free event, part of the Arts Council’s monthly Arts Alive performance art series, features food trucks, arts and crafts vendors, live art and music all day from rap to rock. A portion of Corry Street, from Dayton Street to Xenia Avenue will be closed from 5 to 10 p.m. with Village Fam headlining at 9 p.m.

According to Village Fam member Aaron Willis, aka Ace Toogs, the festival is a way of giving back and sharing good music with a younger generation.

“This is for the kids because when we grew up there was not much to do,” Willis said, adding: “I didn’t know any hip-hop groups here growing up — we were the first ones to do it.”

Village Fam gets back the support it gives to the local music scene. Coming full circle, this spring Village Fam’s Yellow Springs-themed song, “All I Know Is the Village” was chosen as the Yellow Springs High School senior class song and played at graduation.

“We are definitely supported by the village across age groups and especially in the high school,” Willis said.

On the second Saturday of each month, Arts Council’s Arts Alive series brings performance artists to its Corry Street gallery, from storytellers and poets to musicians and dancers, according to series organizer Lara Bauer. At its small outdoor stage, the Arts Council can accommodate performers who have few other venues, Bauer explained.

“I personally think we have so much talent in Yellow Springs and there aren’t many opportunities for people to come out and see them, and there is no perfect place,” Bauer said.
Bauer approached Village Fam about collaborating for this year’s Summer Jam and joined forces to create a family-friendly block-party style event with a “fun, festival feel,” she said. With live chalk artists and other art demonstrations and vendors offering face painting and henna tattoos, Willis believes it will be plenty entertaining and show off what makes Yellow Springs unique.

“The festival will show that we have a community that is open and welcoming with nice people that like to have a good time,” Willis said.

Willis added he is excited that the festival will bring music downtown during a time when the Village is enforcing a new policy on street musicians.

“It will be good to take back the street,” Willis said.

Bauer, who previously organized the Dayton Street Cirque Carnivals, said she had wanted to promote local music through the Arts Alive series as the village is rich in both emerging and experienced musicians.

“There is so much talent in so many age groups and across so many styles of music,” Bauer said.

Village Fam plays a “party-type hip-hop — not gansta rap” with songs to “make people happy,” according to Willis. The band’s website describes the sound as a “blend of raw HipHop smooth rap and pop music.” Together Village Fam has traveled to Pittsburgh, Indiana and Athens, Ohio for shows, while striking out in their own musical directions, with more than 100 songs written between them over the last few years. For example, Walker, a rapper and producer, recently signed his first record deal with Global Music Group of Atlanta, Ga.

Village Fam typically breaks even with its event and any leftover proceeds are shared among musicians, Willis said.

For more information on the Summer Jam, contact Bauer at the Arts Council at 937-751-2616 or Flyingbuffalo2@gmail.com. For more on Village Fam, contact them at villagefam@gmail.com.