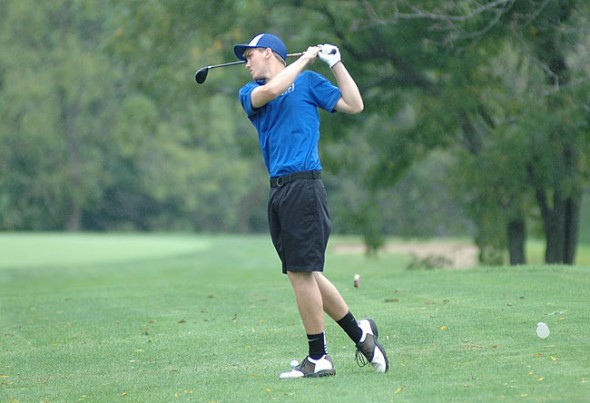 Bulldog golfer Liam Weigand shot an even 46 on both halves of Springfield’s Reid North Golf Course during a tournament held on Saturday, Sept. 6. (photo by Lauren Heaton)

According to Coach Chris Linkhart, the Lady Bulldogs put up quite a battle. Modjeska Chavez’s serving (14 points) was one of the keys to staying in the game along with Meredith Rowe’s strong hitting (18 kills).

“I’m really proud of how my girls played,” Linkhart said. “When they play together as well as they did, the loss doesn’t sting so much.”

The Bulldogs started off slow by losing the first two sets but picked up their game thanks to serving and setting by Kasey Linkhart (20 points, 28 assists) and hitting by Rowe (26 kills).

After rallying back to win the next two sets, the team stayed even with Xenia Christian in the fifth set. With the score tied at 12–12, XC was finally able to break Linkhart’s serve and went on to score the next two points to win the match. Also playing strong were libero Gracie Wilke (19 digs) and Elizabeth Smith (11 points, 15 blocks).

CROSS COUNTRY
Walkey pushes girls to 7th
Charlotte Walkey led the YSHS girls cross country team to a seventh-place finish out of nine teams at the Graham Invitational on Saturday. Walkey placed 21st out of 112 runners with a time of 23:08 for the 5-kilometer run. Olivia Brintlinger-Conn wasn’t far behind in 26th place with a run of 23:21. Also finishing strong were Maya Creighton (23:56), Hannah Morrison (27:53) and Alejandra Erazo (31:07).

Brown, Gravley-Novello in lead
The YSHS boys cross country team came in 12th out of 14 teams with Levi Brown crossing the finish line ahead of the rest of the Bulldog runners in 19:22. His run was good for 37th place, out of 149 runners. Connor Gravley-Novello followed with a 20:28 run. Other Bulldog runners making a strong showing were Zach Brintlinger-Conn, 21:19, Donnie Isenbarger, 21:26, Kaden Boutis, 22:05, Josh Seitz, 22:30 and Noah Van Damme, 26:34.

Edwards first of 100 runners
Bella Edwards won the middle school girls race at the Graham Invitational on Saturday. Edwards bested 99 other area runners in her 13:14 performance over 3200 meters. Fellow McKinney runner Jude Meekin was close behind in seventh place, in 13:59. In the middle school boys race, Zach Lugo was the top Bulldog runner, finishing 33rd out of 93 runners with a 13:36. Gabe Porter came in after with a 16:39.

The Bulldogs kept the edge when YSHS goalkeeper Devon Perry made a stunning save with 11 seconds remaining in the contest. Perry has had three shutouts in the last four games. Earlier, Bulldog forward Ian Chick came away with the goal on an assist from Ethan Dewine despite being double-teamed the entire match.

“It was a great game — we always have tough matches against Greenview,” Coach Ben Van Ausdal said.

Other Bulldogs contributing to the win were defenders Liam Creighton, Fielding Lews, Henry Potts-Rubin and Kaner Butler, Jared Scarfpin who controlled the middle of the field and Augie Knemeyer who won battles in the air.

YSHS is now 4–2–2 and ranked number two in the Dayton area for Division III.

Price scores in girls’ loss
On Monday a high energy Bulldog team played Dayton Christian JV under the lights. Sophomore Nekyla Hawkins started in goal and made several saves until an outside shot and a breakaway goal found the net. With 15 minutes left in the half, after some back and forth play in the middle of the field, freshman Gracie Price broke away towards the Dayton Christian goal and scored, resulting in a half time score of 2–1.

In the second half senior Gigi Niang debuted in goal and had seven saves to hold off the DC offense until a series of controversial collisions resulted in Dayton Christian goals. Late in the second half junior Alice Miller led an offensive run and the Dayton Christian keeper thwarted a well-placed shot by junior Anna Mullin to keep the Bulldogs to one goal for the game.

Last week the YSHS girls soccer team traveled to Beavercreek. Freshman defenders Greta Kremer and Yasmine Longshaw shut down the right side of the field but Beavercreek went ahead early after finding the far side of the net. The quick start to the game and physical play threw off the Bulldogs until Price and sophomore Rachel Hiatt connected to take the ball forward. In the second half Sophomore Erica Ranard pressured the Beavercreek offense to turn over the ball several times and Freshman Jasmine Davidson beat her defender and had a great opportunity at goal but the Beavercreek goalkeeper got to it. The Bulldogs went scoreless on the night.