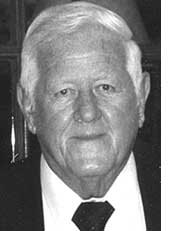 Robert J. Phillips, of Yellow Springs, passed away at Springfield Regional Medical Center on Sept. 3. He was 90.

Robert was born on Oct. 31, 1923, to the late John and Mary (Linson) Phillips in Springfield. He was a graduate of Bryan High School, in Yellow Springs, in 1941. Soon after graduation, he began working as a mechanic for Howard Kahoe and later for KBS (Yellow Springs Lumber Co.). He worked at Deaton Hardware for 13 years. He retired from Yellow Springs Instrument Co. He was a devoted member of St. Pauls Catholic Church since childhood, where he served in many capacities.

Along with his parents, Robert was preceded in death by his sisters, Norma (Robert) Beatty, Maxine (William) Gray, Marjorie (William) Barbee; brother William Gordon and nephew Jack Beatty. Robert will be truly missed by his family and many friends. A Mass of Christian Burial was held Saturday, Sept. 6, at St. Paul Catholic Church in Yellow Springs. Condolences may be forwarded to the family by visiting http://www.jacksonlytle.com.