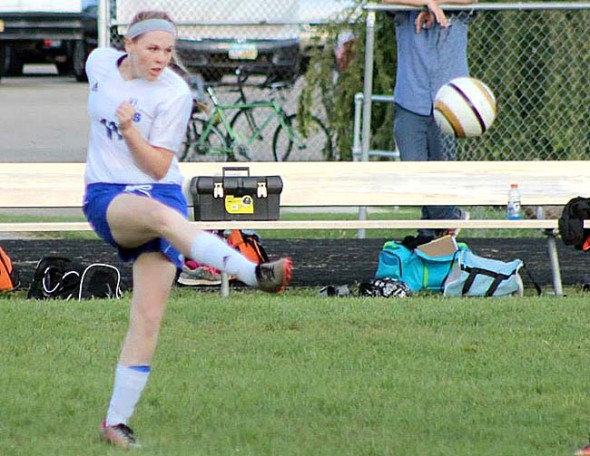 The YSHS varsity volleyball team once again started off the week battling illness. Missing its libero (Gracie Wilke), the team took on Fairborn High School at home on Monday, Sept. 15. The Lady Bulldogs couldn’t seem to find their footing until the third set of the match when they surprised the visiting Skyhawks by coming out strong and taking control to win the game. Digging in for the fourth set, YSHS played tough but Fairborn had the advantage and squeaked out the win.

Despite strong play by every player on the Lady Bulldog squad, Fairborn came away with the win 25–17, 25–15, 19–25, 27–25. Elizabeth Smith led with 10 points and Modjeska Chavez and Madeline Neilsen added nine each during the loss.

YSHS then travelled to Emmanuel Christian on Tuesday, Sept. 16, to face the conference’s first-place team. Playing against experienced players and despite the Lady Bulldogs missing two out the three of their middle hitters, the team played fantastic volleyball, according to Coach Chris Linkhart.

The Lady Bulldogs didn’t get their start until the second game, but they came out fighting and held the lead for most of the game. With the score tied at 22–22, the Lions took over serving and used their strong serving skills to finish the game. In the third set YSHS played strong and made EC fight for every point. EC held on to win but again the YSHS players made them earn every point. Chavez and Meredith Rowe were very smart and strong servers (seven points each) against the Lions while Wilke was able to dig up 13 of their Lions hits, according to Linkhart. The final scores were 25–14, 25–22, 25–14.

YSHS brought a healthier team to its home game on Thursday, Sept.18 against Middletown Christian and it paid off with the Lady Bulldogs winning easily in three sets, 25–8, 25–10, 25–10. Good serving was the key to the team’s success with Rowe (17 points) and Kasey Linkhart (16 points) leading the team. Peifer helped the squad with four kills and Julie Roberts put up six assists to help YSHS seal the win. Dede Cheatum returned to the team after battling injury to dominate the net and serve up seven points.

Last week, the Lady Bulldogs lost to Emmanuel Christian in straight sets (25–15, 25–14). Aliza Skinner led the team with three digs, while Worsham, James and Stewart all had two digs a piece.

After falling in the season opener against Troy Christian (25–19, 25–8), the McKinney eighth-grade girls volleyball team got its first win of the season with a strong showing against Dayton Christian (25–14, 25–18). In that victory, Hailey Qualls led all scorers with 11 points and four aces.

The team then fell short against the Dayton Golden Angels (25–9, 25–17) and Emmanuel Christian (25–8, 25–17), but came out strong in a match against Middletown Christian, winning the first set 25–23. The back-and-forth match concluded with Middletown Christian victorious, taking the second set 25–14 and the deciding third set 25–18. The 8th grade team record is now 1–4.

“We have a very talented and athletic squad this year,” Coach Bubba Worsham said. “We are working on teamwork, consistency and mental toughness.”

According to Worsham, Lauryn DeWine, Qualls, and Audrey Thomas are serving above 80 percent on the season, and Freddie Collins “found her rhythm” against Middletown Christian serving 86 percent with 11 points and four aces. Alex Ronnebaum “keeps opposing teams honest at the net” with 11 kills and 5 blocks, he said.