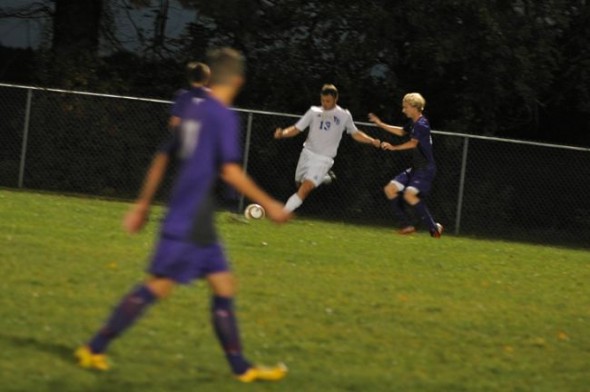 YSHS senior forward Ian Chick crosses the ball during the first half of the Bulldogs' loss to Dayton Christian on Friday. (Photo by Megan Bachman)

In front of a homecoming crowd, the Yellow Springs High School boys soccer team faced conference rival Dayton Christian in a battle for the league title. The Bulldogs went down 3–0 and tried to claw their way back into the game with aggressive play and impressive runs, but the deficit was too big for YSHS to overcome. They lost 3-1.

In recent games the Bulldogs (5–3–6) have failed to finish chances, and games lately, and Friday night’s contest was more of the same With its win over YSHS, Dayton Christian earned the Metro Buckeye Conference championship title.

Read the upcoming issue of the News for the full story.