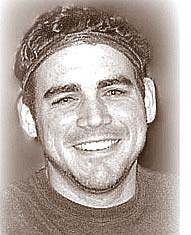 Bryan F. Gabbard, of Yellow Springs, and formerly of Centerville, passed away unexpectedly on Saturday, Oct. 25, just a few weeks from his 29th birthday.

Bryan graduated from Centerville High School in 2004, where he was voted as having the “best smile” in his class. He played soccer for CHS, highlighted by scoring the winning goal against St. Ignatius in 2002. He expanded his interest in soccer, becoming a referee at age 11, highlighted by working elite U-17 games at the USA Cup in 1999 at the age of 13.

Bryan was preceded in death by his loving mother, Ann Padgett Gabbard, in 2007. He leaves to mourn his early passing his beloved father, Stephen R. Gabbard, of Yellow Springs; his younger brother and confidante, Kevin M. Gabbard and his wife Linda Peia, of San Diego, Calif.; his beloved grandmother Vernell Padgett and his aunt Debbie Padgett, of West Columbia, S.C.; his aunt Petie Brown of Hilo, Hawaii, and his stepmother Christina Martin Gabbard, of Yellow Springs, along with many other relatives and good friends too numerous to mention. Bryan cared deeply for others and although his light has dimmed on this earth, it continues to shine over us in the cosmos. His loss will be forever felt.

In lieu of flowers, the family suggests donations be made to the American Cancer Society in honor of Bryan’s mother.

To leave the family a message of condolence, please visit http://www.NewcomerDayton .com