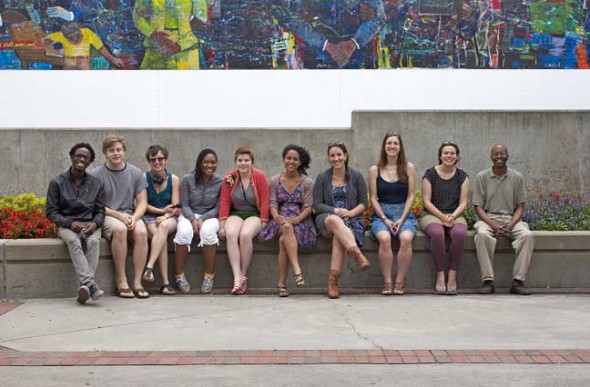 Fifty years ago this summer, a number of Antioch College students and alumni joined activists from all over the country to converge on Mississippi as a part of Freedom Summer. This project was aimed at establishing and supporting Freedom Schools throughout the state as a response to the segregation laws in the south and to help register African-American voters, particularly to participate in the 1964 Democratic national convention after they had been prevented from participating in the all-white Mississippi Democratic Party.

The Freedom Summer project and the events that followed in 1964 left their mark on Antioch. In many ways, the participation of Antioch students and graduates in the project was a continuation of the school’s commitment to social justice, but the experiences of that summer affected many of the participants deeply. For some, this chance to put beliefs into action served as inspiration for a lifelong commitment to activist work. And the college soon gave more students the opportunity to act on their convictions by offering credit for co-op work at organizations like COFO, the Council of Federated Organizations, which included the groups that made Freedom Summer possible.

“That was sort of a formalization of this work,” said Scott Sanders, Antioch’s college archivist, recently.

This year, seven current Antioch students participated in this Antioch tradition by traveling to Mississippi during their most recent break to attend a conference on the 50th anniversary of  Freedom Summer. Like Antioch students of five decades ago, the current students also found themselves inspired in unexpected ways.

When Kijin Higashibaba, now a second-year student, came to Antioch, she was skeptical about the usefulness of social activism in the current political situation. She said she felt like there was no longer anything worth pouring all her energy into, that there were no issues about which anyone could say, “this is definitely wrong.” She signed up for the trip to the conference and the community engagement class to follow with the intention of learning more about the civil rights era, when she said she thought that the protest movement had been more effective.

However, Higashibaba found something unexpected in the workshops and conversations she had with other attendees. Over the course of the conference her cynicism about the validity of taking a strong stance on issues of civil rights diminished. The workshops at the conference helped convince her that it was possible for her to engage in activism around issues that concerned her.

“That was new and different for me,” she said. “I don’t know what the solutions are, but there are things that are just wrong.”

In a 1965 article for Antioch’s student paper, the Record, 1965 graduate Terri Shaw described her experiences participating in Freedom Summer. She took a car full of other participants in the Freedom Summer project down to Hattiesburg, where she collected information on intimidation and harassment related to the Freedom Summer project as well as desegregation following the passage of the Civil Rights Act, of which she unfortunately found no shortage. Overall, she said, she and other activists had mixed feelings about the experience, torn between excitement about the work they did and “a feeling that we should have accomplished a lot more.”

Shaw also recalled an especially difficult part of  the summer. As she drove through Meridian on the way to Hattiesburg, she heard on the radio the news of the disappearance of three civil rights activists, James Earl Chaney, Andrew Goodman, and Michael Schwerner, who had been investigating the burning of a church in Longdale. She had been introduced to Schwerner at their training in Oxford, Ohio, and Meridian was only about an hour away from Philadelphia, where the three had gone missing. This news, she said, set the tone for the beginning of her work on the project, just as the discovery of the men’s bodies  a few weeks later loomed over the Democratic National Convention in Atlantic City.

In January of this year, David Goodman, a member of Antioch’s board of trustees, contacted Kevin McGruder, professor of history at the college, to tell him about the conference taking place in Mississippi for Freedom Summer’s 50th anniversary. Goodman’s brother, Andrew, was one of the three activists killed outside of Philadelphia. The conversation led McGruder and two other Antioch staff members to accompany seven Antioch students to this conference to understand how they relate to current Antioch.

Freedom Summer 50 took place on the campus of Tougaloo College in Jackson, Mississippi, one of the historically black colleges most involved in Freedom Summer. The conference both commemorated the 50th anniversary of the Freedom Summer project and hosted workshops on civil rights work that still needs to be done, including workshops on education, health, voting rights, and labor rights. The conference offered students an opportunity to learn about the role played by Antioch students previously and to think about how to apply past lessons to ongoing struggles, according to the participants.

“The conference organizers were very intentional about not having the main focus be on looking back” said McGruder.

The emphasis on the importance of ongoing struggles prompted the students to question what they could be doing to help, several said. Several  involved said that they were struck by the how young the people involved in the Freedom Summer project had been, and felt they were doing little important work by comparison. But it was also inspiring to know that students had played a large role in such an important movement.

First-year student Ciana Ayenu said the conference prompted her to think much more about her identity as a black person than is usually the case at Antioch.

“I got to have a lot of interesting conversations about race that we don’t really have here, even though we maybe pretend like we do,” she said.

Especially memorable for second-year student Eric Rhodes was an event that took place just north of Jackson, in Canton, Mississippi. He had followed the labor rights track of the conference, and on the afternoon of Friday, June 27, he participated in a protest to support the unionization efforts of workers at a Nissan manufacturing and assembly plant in Canton. Soon after his bus arrived, the tone of the protest became more serious.

“We were there in front of the gates, probably 400 of us, and this unmarked car pulls up,” Rhodes said. “A guy gets out who has the Nissan insignia all over him.”

As the man seemed to be surveying the situation, several United Auto Workers security workers approached him to find out what he was doing, but he quickly got back in his car and drove away. A few minutes later several Jackson County sheriff SUVs circled the protest, parked near the gates to the factory, and stepped out of their vehicles,  carrying shotguns. The man from the unmarked car, who the protesters believed to be a Nissan representative, stood with the police. The experience was unlike anything Rhodes had seen before.

“Coming from my background, being in a place where the state has allied with corporate interests to coerce people through the fear of violence” was eye-opening, he said.

This term at Antioch, the seven students are participating in a class on community engagement taught by McGruder and Nick Daily. The class encourages them to apply what they learned at the conference to issues concerning the Antioch community as well as other communities to which the students are connected. While the conference and class are both intended to help produce leaders in community engagement, they both emphasize that leaders don’t necessarily work in the spotlight or have all the answers.

McGruder and Daily will guide students toward understanding the needs of the people with whom they’re working, learning how to gather information on those needs and build trust with the people. The students will then describe how they plan to meet those needs, forming plans based on all this information.

In many ways the class facilitates the retention of the connections drawn between Antioch’s activist past and the role these students will play in its future.