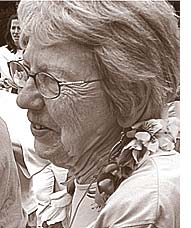 Mary was born in 1923 in Kirksville, Mo., where her father attended osteopathic college. At age two, she returned with her family to their farm near Naples, Maine. She graduated from Gould Academy, Oberlin College and Katherine Gibbs School in New York before coming to Antioch College as assistant to the registrar and later lab assistant to scientist Dr. Eliot Valenstein at Fels Research Institute. She illustrated one lab experiment for Dr. Valenstein’s book “Brain Control.”

She was married in 1950 to Paul R. Cooper. They had two daughters, one the child of her brother whose wife had become ill.

Her work was exhibited at the Springfield Art Museum, Glen Helen and Columbus Museum of Art. Her rendering of the symbol of the Mound City Park became a permanent symbol for the Hopewell Culture National Park in Chillicothe. She attributed her interests in nature to life on the family farm and woods.

In 1970 she moved to Chillicothe, Ohio, where she had a home studio until moving to Bristol Village, a retirement community near Waverly, Ohio. She successfully produced high fired ceramic wall hangings and water color landscapes. In Waverly, she continued with her painting while leading development of a large community wildflower garden, now named for her.

At her request, her remains were given to the Ohio State medical school.

A memorial service was held for her in Bristol Village on Friday, Sept. 26. Her family will have a private remembrance at their family farm in Maine, date to be determined.

Mary was preceded in death by daughter Wendy. Mary is survived by her daughter Scotte and husband Bil Kilby and daughter Kate and many devoted nieces and nephews.