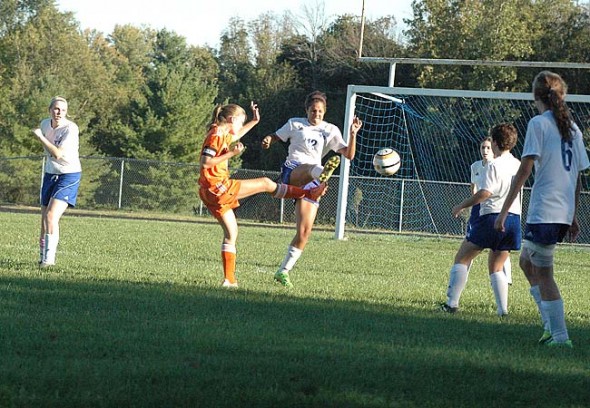 YSHS defender Nekyla Hawkins leaped above a Beavercreek forward to challenge for the ball during a matchup last Tuesday. The Lady Bulldogs maintained a strong defensive front in the first half but ended up losing 5–0. (Photo by Megan Bachman)

The Yellow Springs High School cross-country team had a great showing at the Buck Creek Invitational on Saturday. Nine Bulldog runners had their best personal times ever at the meet.

The Bulldogs girls team placed 15th out of 17 teams at Buck Creek. The top YSHS runner was Charlotte Walkey, who came in 31st place in 22:40 for the 5-kilometer race. Olivia Brintlinger-Conn placed 38th with a personal time best of 22:50. Maya Creighton also ran for a personal record of 23:12, good for 49th place. Alejandra Erazo (139th) and Emma Romohr (149th) also achieved their fastest times ever. Hannah Morrison finished in 169th. There were 181 female runners competing.

McKinney runner Bella Edwards won the middle school girls race at Buck Creek in a personal best time of 13:03. She beat 152 area runners in the 3200-meter race. McKinney boys Zach Lugo and Gabe Potter placed 33rd and 129th, respectively. Lugo finished his fastest race ever, 13:12, and Potter came in at 17:03.

On Wednesday, Sept. 24, the YSHS volleyball team lost a tough match in three games against Xenia High School, 25–7, 25–19, 25–18. After getting a slow start, the Bulldogs fought hard against the Buccaneers but couldn’t hold back the big hitters.  Meredith Rowe had five points in the loss, with Elizabeth Smith and Kasey Linkhart contributing four points each.

Later in the week, the Bulldogs hosted conference rival Troy Christian, honoring YSHS seniors Modjeska Chavez and Mollye Malone on senior night. The Eagles came out ahead of the close match (25–22, 26–24, 23–25, 25–16) but the Bulldogs made them earn every point.

“My whole team played well —with my seniors having their best performance of the season,” Coach Chris Linkhart said.

Chavez had six kills and Malone racked up a season high of 14 points with two aces for the team.

Last Saturday, the Bulldogs played another closely matched team in a nonconference game against Stivers. Missing their starting setter, Kasey Linkhart, the Bulldogs came together to win in four games, 25–23, 25–21, 20–25, 25–13.

Malone was once a again a key player with 12 points and three aces. She had help from Madeline Neilsen who had 15 points, three aces and 10 digs, and Elizabeth Smith had one of her best games with 11 points, two kills, 10 digs and eight blocks. In addition, Julian Roberts had 11 assists, allowing Meredith Rowe to put down 10 kills in the match.

Tyler Linkhart continued to accumulate points (38) and aces (32) over the three matches at a remarkable pace. In addition to three kills, Areli Erazo served above 90 percent and scored nine points against Dunbar. Abby McAnearny served error-free and accumulated eight points in the victory against Troy Christian.

“This year’s seventh-grade Bulldogs are a fundamentally sound group that just keeps taking it to the opposing team, making them earn every point,” Coach Bubba Worsham said.

The McKinney eight-grade volleyball team displayed mental toughness and racked up two gutsy wins last week, improving its season record to 3–4. Against Greenon the team dropped the first set 11–25. But they managed to regroup and capture the next sets 25–18, 25–22.

In the win, assist leader Kayla Brown and fellow setter Meryam Raissouni set up multiple successful kill shots on the day. Alex Ronnebaum stepped to the service line during the clutch closing minutes and scattered five accurately-placed serves to close out the match.

The YSHS girls varsity soccer team had a home field rematch with the Beavercreek reserve team on Tuesday, Oct. 23, and most of the play was in the middle third of the field until Beavercreek slipped past the Bulldog defense and put one in the net for a 1–0 half-time and game score.

On Saturday, Oct. 27 the Bulldogs were on the road in their second JV/Varsity double header against Springfield. The junior varsity played an exciting back-and-forth game with sophomore forwards Amelia Gray, Erica Ranard, and freshman midfielders Ella Comerford and Erin Mooneyham all having opportunities at goal. Springfield took the evenly matched game 2–0.

In the varsity game, the Bulldogs let in an early goal but regrouped after halftime to play Springfield even at two goals each. Senior Jesi Worsham celebrated her birthday with a goal in the 59th minute, and senior Gigi Niang followed her lead with the Bulldogs second goal.

Boys struggle to finish in ties

In the final seconds of the varsity soccer game against Waynesville last week, a YSHS forward sent a chance to score sailing over the goal post to end in a tie. While dominating on both sides on the field, the YSHS boys soccer team can’t seem to finish scoring opportunities, or games.

This week the team tied on the road three times, moving to 4–2–5 on the season.

“We just need to finish,” Coach Ben Van Ausdal said. “We’re in a funk right now and, for us, tying is losing.”

Against Lehman Catholic last week, the Bulldogs were ahead 1–0 from a Jared Scarfpin goal assisted by Nathan Miller until, with just three minutes remaining in the contest, a hard YSHS foul led to a dangerous Lehman Catholic free kick that found the goal for a 1–1 tie.

At Waynesville, YSHS outshot their opponents and went up 3–1 before they let Waynesville crawl back to even the game.

At Lynchburg-Clay the team tied 1–1 in a game Van Ausdal called “flat” and with the opponents scoring on a fluke cross.

But the team is still undefeated in conference play and with a 3–0–1 record at home. Hopes are high as the team heads into an important week of league play.