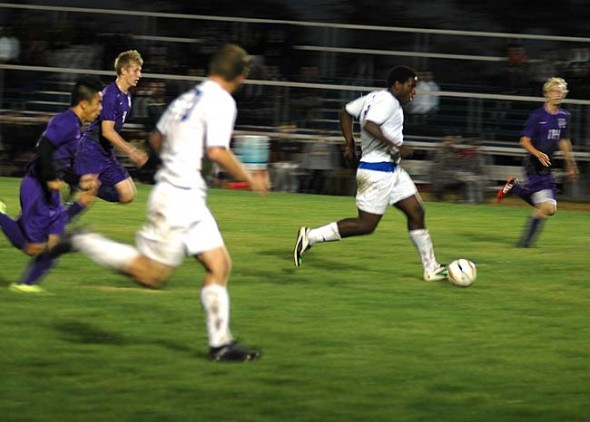 In front of a homecoming crowd, the Yellow Springs High School boys soccer team faced conference rival Dayton Christian in a battle for the league title last Friday night. The 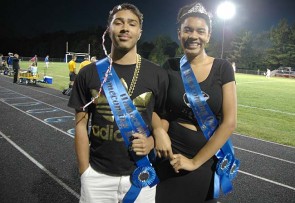 Bulldogs went down 3–0 and tried to claw their way back into the game with aggressive play and impressive runs, but the deficit was too big for YSHS to overcome. They lost 3–1.

In recent games the Bulldogs (5–3–6) have failed to finish chances, and games lately, and Friday night’s contest was more of the same. With its win over YSHS, Dayton Christian will likely earn the Metro Buckeye Conference championship title as it remains undefeated with one match to play. YSHS plays Miami Valley this week for second place in the conference.

Varsity comes back to beat XC

On Tuesday, Sept. 30 the Yellow Springs High School girls varsity volleyball team hosted Xenia Christian for round two of the conference match-ups. YSHS started off well but dropped a close first game. That fired them up because the Bulldogs came out fighting and swept Xenia Christian the next three games. Xenia Christian couldn’t fend off the strong arms of Meredith Rowe, who came away with 18 kills and nine points with two aces, Modjeska Chavez who put down 13 kills and 15 points also with two aces, and Madeline Neilsen with seven kills and six points. In addition, the outstanding performance of Julie Roberts (10 assists, 4 kills) and Kasey Linkhart (9 points, 5 kills, 11 assists) helped seal the win against the Ambassadors.

“The whole team played a solid game,” Coach Chris Linkhart said. “The match was close but we were more consistent and better handling the ball tonight.”

“As has been our mantra all season, the score of the game didn’t reflect how well the Bulldogs played the game,” Coach Linkhart said. “I’m very proud of them.”

The McKinney eighth-grade volleyball team struggled to find its rhythm in the first match of the week against Stivers, losing in two sets (25–12, 25–16). Stivers did a better job working together as a team. YSHS served well (nearly 90% on the day), but was content to play defensively and Stivers took advantage of that tentativeness, according to Coach Bubba Worsham. Setter Kayla Brown accurately set five times which yielded two assists on kills by outside hitter Cierra Richeson.

“We need to see more of that kind of offensive teamwork moving forward,” Coach Worsham said.

On Thursday, the eighth graders returned to their winning ways in a conference rematch with Dayton Christian (25–9, 25–10). Hailey Qualls was perfect from the line (23 for 23 with 21 points and 13 aces) as was Freddie Collins (12 for 12 with 11 points, all aces). Lauryn DeWine and Alex Ronnebaum had two blocks each. The eighth-grade team is 4–5 overall and 3–3 in conference play.

Last Tuesday, after losing the first set to Stivers, Tyler Linkhart rallied her team by starting the second set with 14 straight points. The team then held on in the third set with strong serving performances by Abby McAnerney (8 points), Olivia Snoddy (7 points), and Areli Erazo (6 points). Setter Riley Duncan added two assists in the win.

On Saturday, the seventh graders hosted a rematch with Dunbar and once again came out on top. Erazo led the team with 13 points and nine aces. McAnerney was once again consistent at the line chalking up seven points on seven aces. Olivia Snoddy and Jane Meister added six points apiece. And Zoey Williams strategically placed five service returns into open places on the opposing court to stop Dunbar’s service momentum at crucial moments during the match.

On Saturday the YSHS boys and girls cross country teams traveled to Xenia Christian for the Ambassador Classic.

The girls had an impressive finish of third place out of seven teams.

Sole female McKinney runner Bella Edwards herself had a strong day, finishing in third place out of 119 runners in 13:20.

Levi Brown finished strong for the boys at the Ambassador Classic, coming in ninth place out of 116 runners with a time of 19:03. Connor Gravely-Novello followed in 20:53, good for 39th place, Zach Brintlinger-Conn came in 69th (22:22) and Evan Romohr finished in 33:52.