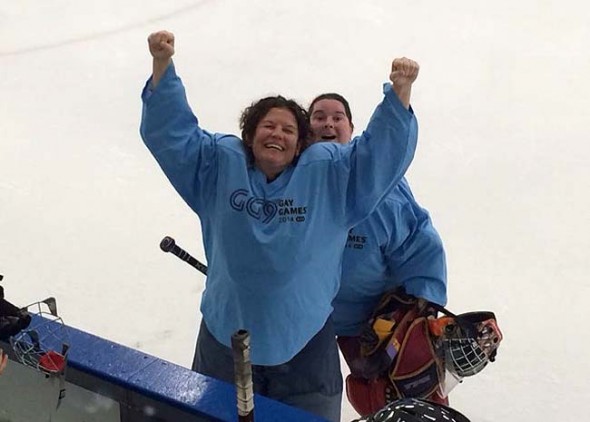 Delaine Adkins, Kristine Hofstra and Judy Kintner came away from the 2014 Gay Games with gold medals and something more — a sense of hope about living in Ohio, a state that has not always felt welcoming to its gay residents.

But in its role as the first Ohio host of the international Gay Games, the City of Cleveland rolled out the red carpet for Adkins, Kintner, Hofstra and the approximately 10,000 other gay (and some straight) athletes who came to compete during the week of Aug. 9–16.

“Everywhere you went in the entire city, there were banners, welcoming gestures,” Kintner said in a recent interview. “I’ve never experienced anything like it before and I didn’t expect it. It was phenomenal.”

For Adkins, the event was a testimony to how far the world has come in the past eight years. When she attended the 2006 Gay Games in Chicago, anti-gay demonstrators with bullhorns marred the opening ceremonies. But this time was different.

“There was none of that in Cleveland,” Adkins said. “A lot has changed in the world in eight years.”

Started in 1986, the Gay Games are an inclusive alternative to the Olympics, where gay athletes still face pressure to hide their sexuality. In some countries, such as this year’s Olympics-host Russia, homosexuality is outlawed, but even in more tolerant countries, subtle pressures persist.

“If you’re a professional athlete, your sponsors would prefer that you stay in the closet,” Hofstra said.

Held in an international city every four years, the Gay Games now attracts about 10,000 participants. This year, athletes hailed from 60 countries and competed in 37 sports. In Cleveland, local Gay Games sponsors were the Cleveland Foundation, the Cleveland Clinic, the Cleveland Cavaliers and corporate sponsors Coca-Cola, Marriott and United Airlines.

For Adkins, Hofstra and Kintner, the event was an opportunity both to feel part of a community and to test their skills against other serious athletes. Adkins was part of a gold-medal winning women’s hockey team, Hofstra won top honors in four biking events, and Kintner took the top prize in her age group in open water swimming, a two-mile swim in Lake Erie. 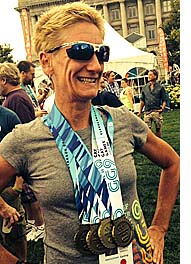 For Adkins, who works in Cincinnati for Proctor and Gamble, the event was the culmination of her longtime love for hockey, a passion she indulges each Monday evening as a member of the Cincinnati Rising Stars, a league team that travels the region. It’s unusual to find a hockey team for women, Adkins said, and even more unusual for a league to accept all levels of players, as does the Rising Stars. While the team itself didn’t compete in the Gay Games, several team members, including Adkins, joined with others to form a team that won the women’s intermediate gold medal.

For Hofstra, an IT administrator for a Columbus company, the gold medal wins came from an effort to stretch herself in her favorite sport, biking. Two years ago she took up bike racing, because “I wanted to see how fast I could go” and joined Team Dayton. With the help of a Team Dayton coach, she trains 8 to 12 hours a week, and this summer spent most weekends with the team at bike races in the state.

“It’s fun, it keeps me in shape and I meet a lot of fascinating people,” she said. “I make new friends wherever I go.” 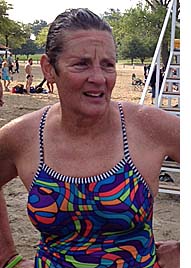 For Kintner, the Village Clerk of Council, training for the Gay Games was a lot less structured. A self-described obsessive swimmer, she swims about a mile and a half a day in the fastlane pool in her garage. Formerly the director of the Antioch College pool, Kintner and six friends pooled their money when the college closed, in order to have a place to swim.

“I’ve been swimming since high school,” she said. “I’ll swim in anything with water.”

However, swimming in Lake Erie proved a challenge. For the open swim, participants started at a city park and swam about 50 yards into the lake, where they treaded water until the race began. A combination of cloudy water and choppy waves made it challenging to stay on course.

“You could literally not see your hand in front of your face,” Kintner said.

Aside from winning the race, the high point for Kintner was sharing the experience with her four sons, Jacob, Shawn, Jonah and Phillip. They were impressed, she said, with the size and welcoming nature of the event.

“It was significant for them to see that, wow, this is a gay thing,” Kintner said.

For Adkins, the most memorable aspect of the Gay Games was “being in a place where I’m normal, where I don’t need to filter my conversation,” she said. “You realize the energy you expend at other times not being the norm.”

While being a mom will probably keep Kintner home from the next Gay Games, four years from now, Hofstra is planning to start training soon. The host city for 2018 is Paris, and Hofstra’s partner, Beth Wiley, a chef, is also eager to visit the city.

For now, though, the medal winners are still feeling the warmth of the 2014 Cleveland Gay Games. There was a lot of talk there about putting gay marriage on the Ohio ballot, according to the athletes, who hope the size of the crowd alerted state leaders to the financial benefits of being more gay-friendly.

“It made people take a look at how this event brought dollars to the state,” Kintner said, still with a hint of disbelief. “It’s awesome that it was in Ohio.”

One Response to “Villagers win gold at Gay Games”